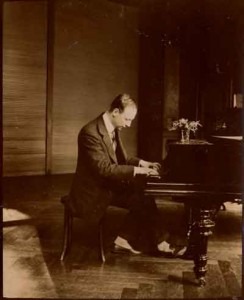 Pianist Egon Petri (1881-1962) was a Dutch citizen, born in Hannover, Germany, to Dutch parents. He first learned violin from his father, Henri Petri, who had been a student of Joseph Joachim, one of the most significant violinists of the 19th century. He started piano at age 7, and continued his violin playing, eventually becoming second violin in his father’s quartet and a member of the Royal Orchestra is Dresden, where his father was concertmaster. By 1901, however, he switched completely to the piano, encouraged by the Italian composer Ferruccio Busoni, a friend of the family.

He went to Berlin to study with Busoni before starting his international touring career in Europe and the US. He also toured the Soviet Union, becoming one of the first foreign musicians to enter the country. He appeared in London with Busoni in two-piano recitals in 1921. Busoni remained an important influence on his and Petri is considered one of the foremost interpreters of Busoni’s music.

Petri taught in England (Manchester Royal College of Music for six years (1905-1911)), Switzerland, and Germany, joining Schoenberg in Berlin at the Hochschule für Musik (1921-1926) before moving to the US in 1938 to spend the war years teaching at Cornell University. In 1947, he went to California to teach at Mills College, where composer Darius Milhaud had been teaching since 1941 and John Cage was in charge of piano accompanying.

As influenced by Busoni, the music of J.S. Bach and Franz Liszt remained central to his repertoire; he was also a proponent of modern music. During WWI, he had stayed with Busoni in neutral Switzerland where they edited the keyboard works of Bach. In this 1942 recording, Petri plays Busoni’s piano arrangements of four of Bach’s Chorale Prelude.

His student at Mills College, Earl Wild, described Petri’s “quiet tone that was never forced…his playing had a long line instead of stopping to suffer over a phrase.” His size gave him an authority over the keyboard, which, combined with his superb technique, made him a powerful performer of the larger works of the masters of 19th century keyboard: Beethoven, Liszt, and Brahms.