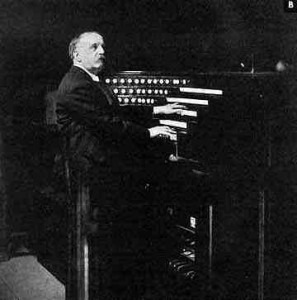 If you are working as a roofer, miner, logger, fisher, construction-equipment operator or in law enforcement, you have selected a profession that is designated as high-risk or safety sensitive. Although these jobs are not especially lucrative in terms of payment, serious or even fatal accidents sadly happen with some regularity. Being a musician is not necessarily considered high-risk, but on rare occasions death does happen on the job. The French organist and composer Louis Vierne (1870-1937) held one of the most prestigious organ posts at Notre-Dame cathedral in Paris. He had been in the service of the church for almost 37 years when the clerical leadership decided that Notre Dame would no longer support his weekly organ recitals. Regardless, one final farewell concert was scheduled for the evening of 2 June 1937, which would turn out to be the 1750th public performance of Vierne’s career. Vierne could not have foreseen that it was going to be his last concert in more than one way!

Vierne had lived a physically and emotionally trying life. Born with congenital cataracts in both eyes, he was considered “legally blind.” During his early career—he started to take piano lessons at the age of 2—he composed on oversized manuscript paper and used large pencils. As his eyesight deteriorated further, most of his compositional activity was done in Braille. His marriage ended tragically, with his wife leaving him for his best friend. His much-beloved daughter Colette wasn’t actually his daughter at all, and his eldest son and his brother were killed fighting in World War 1. In a rogue street accident he suffered multiple compound fractures to his left leg, and he had to spend painful years relearning his pedal technique on the organ. He underwent advanced eye treatment in Switzerland for four years. Although he spent six months in a completely darkened room, the treatment was unsuccessful. In addition, he was smoking three packs of cigarettes a day, habitually taking tranquilizers and sleeping pills, and inhaled ether when he became agitated.

Louis Vierne: Triptyque, Op. 58, “Stele pour un enfant défunt”
On 2 June 1937, 3000 people gathered to hear the famous organist of Notre Dame perform. Apparently, the doctor gave Vierne a heart stimulant to help with the performance. Vierne completed the main concert with his “Stele pour un enfant défunt” from his Triptyque Op. 58. According to members of the audience, Vierne “performed as well as he had ever played.” The closing portion of the concert was to be two improvisations on themes submitted by the audience. He read the first theme in Braille and selected the organ stops he would use for the improvisation. With his foot falling on the low E on the pedal board, Vierne suffered either a massive stroke or heart attack. According to eyewitnesses, he lost consciousness and died moments later with the single note still echoing throughout the church. Vierne had always dreamed of dying at the console of the great organ of Notre-Dame, and for once in his rather tumultuous life, his wish became reality.