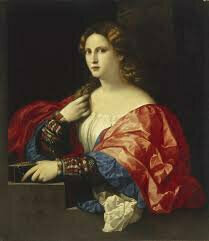 Professionally, Giulio Caccini (1551-1618) was known as an accomplished singer and the inventor of a new musical style that had the power to “move the affections of the soul.” Privately, he seemed to have been a difficult and proud man, frequently motivated by envy and by jealousy. Not unexpectedly, he used his connections with the upper classes to his advantage, and ruthlessly climbed the social ladder. As I had mentioned earlier, he callously informed on an illicit love affair at the Medici household directly leading to the murder of the unfaithful wife. And when it came to matters of love and marriage, Giulio was just as ruthless. According to some reports, Caccini was given a dowry of several times his annual salary to marry the soprano Lucia di Filippo Gagnolanti, a fellow singer at the Medici court. 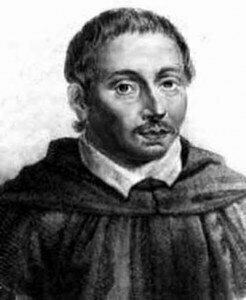 The story goes that Eleanor de’ Medici was slated to marry Duke Vincenzo Gonzaga of Mantua. The Gonzaga Duke had been married before, but that union had produced no children. As such, the Florentines wanted to make sure Vincenzo was capable of siring children, so they sent Lucia di Filippo Gagnolanti to test his virility. Lucia came back pregnant, and the Duke Gonzaga married Eleonora in the same year. In turn, Caccini was offered the large sum of money to restore Lucia’s respectability with marriage. Although it’s an intriguing story, according to scholars, it is “almost certainly untrue.” Be that as it may, Giulio married Lucia in 1584, and they quickly became one of the most famous singing couples in Italy. But even more significantly, the union produced two highly influential daughters, Francesca and Settimia Caccini.

Settimia Caccini: Due luci ridenti
Francesca Caccini was born in 1587 and quickly displayed exceptional musical talents. She received instructions in singing, guitar, harp and keyboard playing and also in composition. In addition, she also received a thorough literary education as she wrote poetry in Italian and in Latin. Giulio, always looking for a business opportunity, negotiated a position for Francesca with the sister-in-law of Cardinal Montalto, which would have included a salary, a dowry and the promise that a suitable husband would be found. In the end Giulio broke the contract and Francesca entered into service with the Medici family. In due time, Francesca became the highest-paid musician on the Medici payroll, and she was the first woman known to have composed an opera. 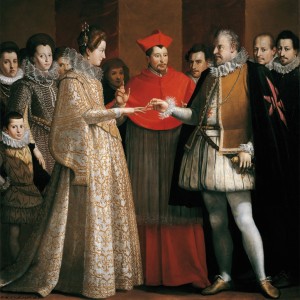 Marriage of Maria de’ Medici and Henri IV of France

Settimia Caccini was born in 1591, and quickly mastering the art of singing, she established “an immortal reputation.” Although the Medici family first employed Settimia, she eventually became the highest-paid musician at the Mantuan court of Duke Ferdinando Gonzaga. Her mother Lucia died in 1593, and Giulio married another singer, Margherita di Agostino Benevoli della Scala. Along with her sister Francesca and her stepmother, Settimia was one of the “donne di Giulio [Romano]” (Giulio Caccini’s women) who performed in Jacopo Peri’s L’Euridice and her father’s Il rapimento di Cefalo in 1600 for the marriage of Maria de’ Medici and Henri IV of France. Giulio’s illegitimate son Pompeo was also part of the ensemble, and in 1604 the family troupe was invited to sing in Paris. Performances along the way in Modena, Milan, Turin and Lyons met with great success and the family returned to Florence only in 1605. Caccini died in 1618 and his widow Margherita lived until 1636. And as we all know, Francesca and Settimia continued to have distinguished and exceptional musical careers.