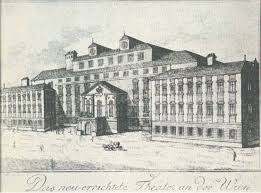 We primarily remember the Viennese theatrical impresario Emanuel Schikaneder as collaborator and librettist on Mozart’s Magic Flute. However, Schikaneder was also directly responsible for several compositions by Ludwig van Beethoven. You see, Schikaneder and his troupe of performers appeared in a number of small theater venues, but in 1786 he was granted an imperial license to build a new large theater. The venue opened on 13 June 1801 under the name “Theater an der Wien” and it was described as “the most lavishly equipped and one of the largest theatres of its age.” The building was nothing short of sensational, and a local critic wrote, “if Schikaneder would have the idea to charge admission simply for looking at the glories of the Theater an der Wien, he would certainly have been able to take in vast sums of money without giving one single performance.” Over the years, the venue saw the premieres of many celebrated works, and it was a favorite venue for Beethoven.

It was in this particular venue that audiences first heard Beethoven’s Symphonies No. 2, 3, 5, 6, the Piano Concertos No. 3 and 4, and “Fidelio,” amongst other. But that is not all, as Beethoven actually lived in rooms inside the theatre for over a year. Early in 1803, Schikaneder appointed Beethoven composer at the Theater an der Wien, and he provided him with an apartment that was part of the theatre complex. Since it was all rent-free, Beethoven brought along his brother Carl to live with him. Although Beethoven primarily used this flat to receive visitors, he was also busily composing. In February and March 1803 he worked on the oratorio “Christ on the Mount of Olives,” and by 24 May he finished his famous Kreutzer Sonata, Op. 47. Actually, that sonata was first dedicated to the English virtuoso George Bridgetower, but when the violinist made insulting and disparaging remarks to a lady, Beethoven swiftly changed the dedication. And Beethoven also began work on his opera “Leonore” in the early parts of 1804. However, when Baron Braun bought the theatre in April 1804, Beethoven’s contract was terminated and he once again was forced to look for different living arrangements.