In their attempts to get beyond the symphony as defined by Beethoven, composers came up with new one-movement genres such as the concert overture. Sometimes regarded as a work in search of an opera, the concert overture gave composers the opportunity to write music that could be emotional and creative without the weight of another three hours of an opera.

The Bride of Messina is a two-act tragedy by the German poet Friedrich Schiller, full of the romantic mysteries of unknown parents, lost siblings, vows of victims, and the struggles between two brothers for the esteem of their sister.

In it, Schiller attempted to meld ancient theatre, using elements from Greek tragedies such as a commenting Chorus, and modern theatre, setting the play in wild Sicily, where Paganism and Christianity clash. He wrote the work in 1803, in the middle of 4 significant plays: Maria Stuart (1800), a drama about Mary, Queen of Scots; The Maid of Orleans (1801), where Joan of Arc dies in glory in battle, not at the stake; The Bride of Messina (1803), with its ancient Greek drama–roots; and then William Tell (1804), which looks at political action and if one can justify violence. All of these plays were set as operas.

Schumann declared in 1835 that the concert overture was a ‘respectable but nevertheless provisional solution to the post-Beethovenian symphonic dilemma.’ In a way, in this work, Schumann was conceiving of, and creating a new kind of overture – not a concert overture nor an opera overture, but, as he called it, a ‘theatre overture.’

In his work, Schumann portrays musically the tension between Don Manuel and Don Cesar, brothers at war; there’s a loving clarinet theme that seems to portray their mother, Donna Isabella, but the music at the end tells us of the brothers’ ultimately fatal struggle over the attention from their sister Beatrice. This is Schumann’s only overture to end in a minor key, underscoring the tragedy of the ending.

The work is numbered Opus 100, given to it by Schumann as a measure of the very high esteem in which he held it. Unfortunately, at its premiere in Dusseldorf in 1851, it sank ‘without any trace of applause.’ The city’s newspaper, the Düsseldorfer Zeitung, took aim at Schumann, the city’s director of music, following this concert and shortly thereafter, his contract with the city was terminated. Schumann was committed to a mental institution in 1854 and died there in 1856, age 46. 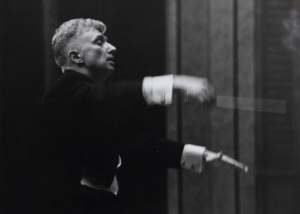 Arthur Winograd (1920-2010) was best known as the founding cellist of the Juilliard String Quartet (founded 1946). After leaving the Juilliard in 1954, he became the chief conductor for Metro-Goldwyn-Mayer’s classical records division (1954-58), made recordings in the 1950s with his own string orchestra, the Philharmonic Orchestra of Hamburg (heard here), and others. This recording dates from 1955. In 1965, he was appointed music director and conductor of the Hartford Symphony Orchestra where he served until 1984. He had been conductor of the Birmingham, AL, Symphony Orchestra from 1960-64. 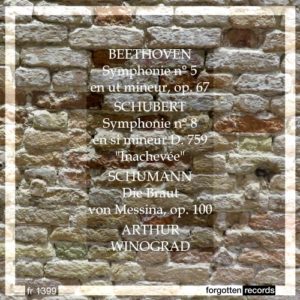