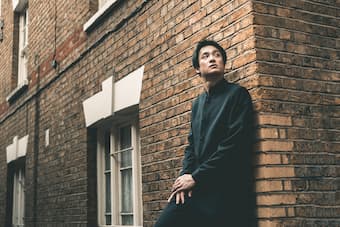 The aria that lies at the core of the work is a Sarabande in ¾ time and the 30 variations that follow key change, time, make the aria into a canon, create different Baroque dances out of the melody, etc.; Variation 30 is a quodlibet that combines several German folk songs. The final sound in the work is a return of the opening aria, bringing us full circle.

In his recording of Bach’s work, Wong uses the Busoni edition, following Busoni’s suggestion for a performance that looks at the work as being made up of 3 groups of pieces: 1) Interplay Within the Circle takes in variations 1 through 13, omitting nos. 3, 9, and 12; 2) Inward Penetration, starts with variation 14 and goes through variation 25, omitting 16, 17, 18, 21, and 24. 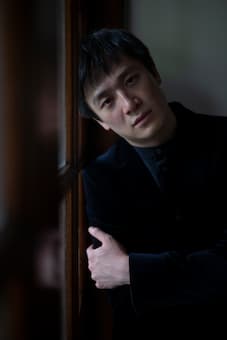 The final group, Outward Exultation, is made up of variations 26 and 28, 29, and 30 and the final reiteration of the opening aria. Wong performs the final aria stripped of all ornaments. It’s a wonderful concept – after all the entanglements of the 30 variations, we’re left at the end with a stark statement of the first idea, like a whole new world opening in front of us.

The cover image, by German artist Jörg Asselborn, captures the Monkey King and Wong in a frame reminiscent of turn-of-the century decoration – a bit of Art Nouveau, perhaps. Or is it the circlet usually worn by the Monkey King in his journey to the West? And whose hand is that – the two people pictured or perhaps Busoni?

All of these elements were in Wong’s mind as he approached this work. Wong, currently working on his dissertation on Busoni at the Royal Academy of Music, sees Busoni as someone who brings the history of music into everything he touches. His editions of Bach brought Bach back into the concert hall. A huge work such as the Goldberg Variations was organized and trimmed and brought back into a perspective that the modern audience could appreciate. Busoni makes a story out of these variations.

In approaching this work, Wong asked what do you pass to the next generation? Every generation has a performer who made the Goldberg Variations his – Schiff, Gould, etc., but they didn’t own the work, they were just borrowing it and reading it in their own special way. In his way, particularly in his approach to the repeat of the final aria, Wong makes his stamp on the work. He’s also taken the work as inspiration for his own composition, included on the disc, based on Variation 15. 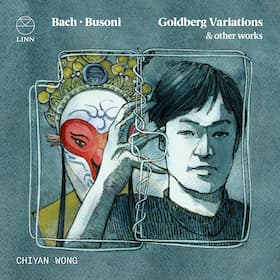 Variation 15 is a canon in inversion and Wong wanted to see what would happen if you inverted it again. He admitted that if you look at it in strict canon structure, you’ll see that he had to cheat occasionally to avoid dissonances and keep the work within tonality, but it was his way of turning Bach upside down once again.

At the end of the album, in addition to his inversion of Variation 15, Wong has included Busoni’s Sonatina No. 4, written Christmas Day 1917, and Busoni’s arrangement of the Chaconne from Bach’s Partita No. 2 for violin in D minor, BWV 1004. In Busoni’s sonatina you hear all kinds of influences, from Bach to the modern age, and it stands as a summary statement of his position in music. You reflect the past, but you always have to look forward. Just like the aria at the end of the Goldberg, the final Chaconne returns us once again to Bach.

We asked what was next on his schedule and, like so many performers, COVID-19 was knocking the heart out of it. He was supposed to be playing the Hammerklavier in Hong Kong – cancelled. Travel is difficult. Future plans may include a performance of works by Thomas Adès in Hungary and a performance in Hong Kong of the 6 Busoni Sonatinas interspersed with works by Grieg, Mozart, Bach, Mendelssohn and other in dialogue with the Busoni works. The performances all depend on the international COVID-19 situation, as do all plans these days.

Looking at Bach through Busoni’s eyes, Busoni through Wong’s eyes, and the whole Goldberg Variations through the concept of the Monkey King brings us a long way from the 18th century and very much into the 21st century.