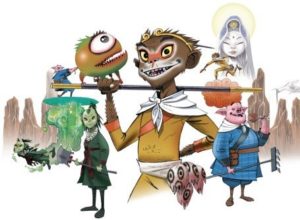 The Monkey King, Pigsy, and Sandy, by Jamie Hewlett

One of the greatest stories of ancient times is the tale of how the Buddhist scriptures came to China. Immortalized in Journey to the West, in a 16th-century text attributed to Wu Cheng’en, the mighty foursome of The Monkey King and his staff of power, Pigsy and his iron rake, Sandy and his wooden staff, and the monk Tripitaka under the protection of the goddess Guanyin set off to India to retrieve original Buddhist scriptures. 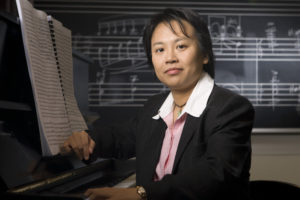 The novel is 100 chapters in length, divided into 4 parts. Part I is on the early history of The Monkey King. A creature of guile and resourcefulness, he remains, for many, the most memorable part of the quartet. Part II introduces Tripitaka and gives his history. Part III, the longest of the story, covers the journey of the quartet. They move through a landscape of fantasy, fighting demons and dragons. The last part, Chapter 100, finishes the story, telling of the successful return of the quartet and how they are rewarded. The Monkey King and Tripitaka achieve Buddhahood, Sandy achieves nirvana but not full Buddhahood, and Pigsy, due to his unremitting greed, becomes an altar cleaner, who gets his ideal job of dealing with offerings at temples. 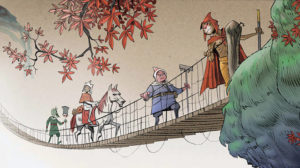 The Pilgrims, by Jamie Hewlett

Taiwanese composer Chiayu Hsu (b. 1975) has her degrees from the Curtis Institute and Yale School of Music with a Ph.D. from Duke University. Her string quartet Journey to the West was winner of the 2013 IAWM (International Alliance for Women in Music) Search for New Music. She is associate professor music at the University of Wisconsin–Eau Claire.

In Journey to the West, Chiayu covers the entirety of the novel in just three movements. The first movement, The Monkey King, covers Part I of the book. To depict the characters, the composer has adapted many Chinese musical techniques, such as giving glissandos to the 2nd violin to imitate the sound of a Chinese fiddle. To capture The Monkey King’s character, which combines childish playfulness and cunning, the composer layers the instruments, shifting the elements of mood, tempo, timbre, and texture.

Chiayu: Journey to the West: I. The Monkey King (The Ciompi Quartet)


The middle movement, In the Winter, uses pentatonic scales to help capture the isolation of winter. Icy tremolos, stark chords of harmonics, and the cold wind played in fast repeated notes.

Chiayu: Journey to the West: II. In the Winter (The Ciompi Quartet)


The third movement, The Journey, starts the same way as most of pilgrim’s interactions, i.e., with a battle. In the end, though, the journey is successful and each character reaches their respective happiness.

Chiayu: Journey to the West: III. The Journey (The Ciompi Quartet)


The characters created by Jamie Hewlett, without Tripitaka, were used by the BBC in 2008 as the start to their coverage of the Beijing Olympics, based on his 2007 stage work Monkey: Journey to the West.