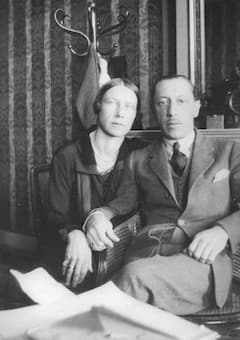 Igor Stravinsky first met Katherine Gavrylivna Nosenko in 1890. He was quietly drawn to “Katya,” who was by all accounts a soft-spoken and intelligent girl. They shared a number of interests, and found common ground in music, as Katya was a fine musician. Katya was the daughter of Stravinsky’s mother’s sister, which made them first cousins. Not a problem by itself, but when they announced their engagement in August 1905, things became complicated. The parents vigorously objected, but quickly realized that the relationship was based on deeply felt emotions. The big stumbling block, however, was the Russian Orthodox Church, which prohibited marriage between first cousins. Undeterred, and without the dispensation necessary under Orthodox law, they married in January 1906. 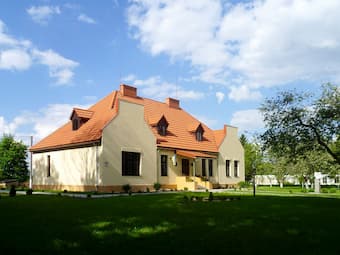 Stravinsky’s house in Ustilug after reconstruction in 2013 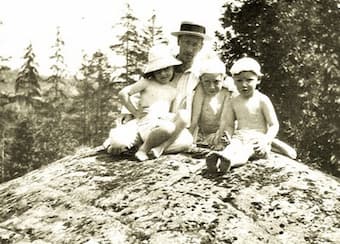 Stravinsky with his children

Igor and Katya, together with their baby son Theodore moved into the new house in 1907. Their daughter Ludmila was born in 1908 and the couple had a total of four children, with Soulima becoming an accomplished pianist who eventually toured with his father. For Stravinsky, Ustilug was “a corner of paradise for his creativity, and he composed a good many of his first compositions at that location. He continued to regularly attend the Evenings of Contemporary Music in St. Petersburg, and performed his first compositions for notable composers, poets and artists in the city. Katya was highly supportive of her husband’s early career, and provided encouragement wherever possible. Soon after arriving at Ustilug, Stravinsky composed a set of still relatively unknown Etudes, in which he foreshadowed his highly original thoughts on rhythm and meter. These four studies for piano are not connected to the artistic circle in St. Petersburg, however, but inspired by the Moscow composer Alexander Scriabin. 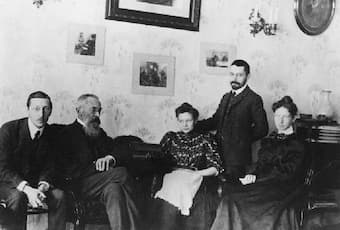 Stravinsky and Rimsky-Korsakov (seated together on the left) in 1908

At Ustilug, Stravinsky was working on an orchestral fantasy planned for the wedding of Rimsky-Korsakov’s daughter. Over a period of several years, Stravinsky had taken private lessons with Rimsky-Korsakov, and in terms of form and orchestration was strongly influenced by the revered master. Stravinsky was deeply shocked and saddened by the news of his teacher’s death. He made the two-and-a-half rail journey from Ustilug to St Petersburg for the funeral, and he eventually composed a funeral tribute. He also revised the orchestral scherzo titled “Fireworks,” which was destined as a wedding present for Rimsky-Korsakov’s daughter Nadezhda, who had married Maximilian Steinberg a few days before her father’s death. That work premiered on 6 February 1909 at the influential Siloti Concerts in St. Petersburg, and the famed Sergei Diaghilev was in the audience. Diaghilev gave Stravinsky some initial assignments, and the commission to Firebird soon followed. Stravinsky and his family had since moved to a flat in St. Petersburg, but with Stravinsky becoming a household name in Paris, the whole family moved and stayed in the West for the time being. 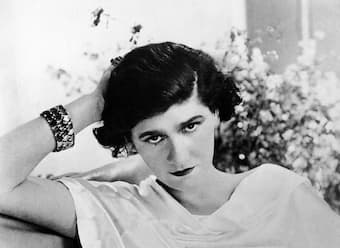 Stravinsky certainly enjoyed the personal attention he received in Paris, and among the biggest love mysteries of all time is his relationship with the French fashion designer and businesswoman Coco Chanel. In fact, a fictionalized account of the affair between these two greats has quite recently appeared on the silver screen. Misia Sert introduced Coco to Stravinsky in May of 1920, and she agreed to underwrite the revival of Stravinsky’s “Rite of Spring,” with a new choreography by Léonide Massine. She also discovered that Stravinsky and his family were looking for place to live, as they had left the Soviet Union after the war. She invited them to her new home, “Bel Respiro,” in the Paris suburb of Garches. 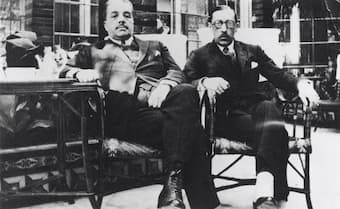 The family arrived in the second week of September 1920 and remained there until May 1921. Chanel was already establishing her couture collection, and she also designed costumes for the Ballets Russes. According to scholars, “the attraction between Stravinsky and Chanel turned to seduction; the affair meant a great deal more to Stravinsky than it did to Chanel, as she was collecting White Russians at the time.” Stravinsky never publicly referred to this alleged affair, but Chanel spoke about it at great length to her biographer Paul Morand. “Reliable details of this affair are naturally hard to come by, and other writers who have relied on later recollections have done so somewhat recklessly.” Stravinsky’s second wife, Vera, disputed Chanel’s claims, and the Chanel fashion house is adamant that there is no evidence that any affair between Chanel and Stravinsky ever occurred. 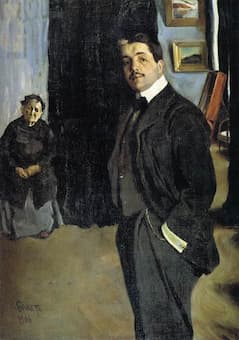 Katya Stravinsky struggled with tuberculosis for most of her adult life. As such, the family moved from Chanel’s house in Paris to Biarritz in May 1921. That elegant seaside town on France’s Basque coast had been a popular resort for European royalty, and it was an established colony of Russian émigrés. Katya’s health was clearly a major motivation for the move to Biarritz, but it “also served for Igor’s emotional convenience, since Paris at once meant love affairs.” With Katya securely settled in Biarritz, Stravinsky freely enjoyed the personal attention he was getting in Paris. Together with Diaghilev, Vera Sudeykina and her painter husband, Stravinsky went to dinner at an Italian restaurant in Montmartre. They had been to a music hall show, and Vera produced “a pack of cards at that meeting and told the composer’s future, presumably saying something about the Queen of Hearts.” 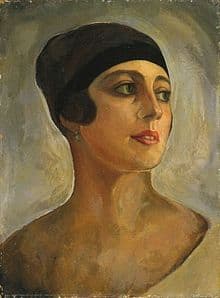 Stravinsky fell instantly in love, but initially not with Vera but with the voluptuous blonde ballerina Yevgeniya (Shenya) Nikitina, who had trained at the imperial Ballet School in St. Petersburg before the Revolution. She now earned her living by appearing in various music hall productions, and Stravinsky and Nikitina engaged in a passionate affair. Apparently, he even composed some dedicated music, the Suite No. 2 for small orchestra, for her music hall talents. Stravinsky writes, “In the spring of 1921 a Paris music hall asked me if I could let them have a few pages of incidental music for a little sketch, within the range of their audience. It amused me to try my hand at that sort of thing, and I therefore orchestrated four pieces taken from my collections of Easy Duets. The third item in the suite, the “Polka” sounds a direct musical quotation from the “Katinska” polka, Nikitina’s theme song. 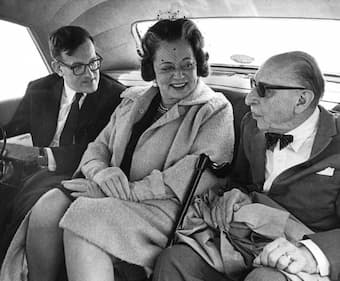 Things did get much more serious, however. Stravinsky had met Vera Sudeykina, the wife of Diaghilev’s former state designer Sergey Sudeykin, who had recently arrived in Paris, at a cabaret in February 1921. Both her parents were of Baltic German nobility, and Vera Bosse initially spent her time at a boarding school in Moscow. She changed her name to Vera de Bosset to hide her German ancestry, and she became a celebrated dancer, eventually immigrating to Paris. In May 1921 she read Stravinsky’s future in some tarot cards, and in July they were passionately in love. Igor and Vera began an affair, and in the spring of 1922 she left her husband. Stravinsky, apparently with his wife’s complicity, “led a double life, with the despotic Igor giving Katya little choice in the matter.” It has been suggested, “Katya bore her husband’s infidelity with a mixture of magnanimity, bitterness, and compassion.” Katya moved from Biarritz to Nice in September 1924, and was also looking after Igor’s mother, who had arrived from Petrograd in 1922. Everything settled into an uneasy routine, with Stravinsky dividing his time between Nice, Paris and foreign tours. Vera would usually accompany him on his travels, but when Vera returned to Paris, Stravinsky met up with Katya and his family, usually in Switzerland. Life took a tragic turn for Stravinsky in 1938. His elder daughter Ludmilla died of tuberculosis at the age of 29, and only 3 month later, Katya herself succumbed to the same illness. In June 1939, Stravinsky’s mother also passed away and the composer together with two of his three surviving children was hospitalized with tuberculosis at the sanatorium of Sancellemoz, where Katya had spent much of her last four years. 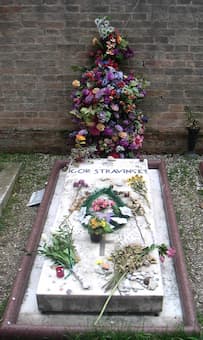 At the outbreak of WWII Stravinsky accepted an appointment at Harvard University, and Vera followed him from Europe. They were married in Bedford, Massachusetts, in March 1940. The newlyweds made a quick trip to Mexico in order to be eligible for US citizenship, which was eventually granted in 1945. They bought a house in West Hollywood, and began residence in the spring of 1941. The Juilliard graduate Robert Craft began to correspond about music with Stravinsky, and eventually Stravinsky invited him to Los Angeles. He became the composer’s assistant, musical interpreter, friend and “even at times his musical conscience.” He reports that Igor and Vera were always a unit, and “that the love they shared for each other was such a quality as to be overwhelming in its impression. Never before had I seen such devotion between two people… Except when he was composing and reading, Stravinsky always wanted his wife at his side.” The Stravinsky household moved to New York in 1969, and they spent part of the summer on the French shore of Lake Geneva. The Stravinsky’s moved once more, from the Essex House to an apartment on Fifth Avenue. Igor died barely a week later, and his body was flown to Venice, where, “at Vera’s wish, it was buried on 14 April, amid considerable pomp, on the cemetery island of San Michele, a few yards from the grave of Serge Diaghilev.” Vera outlived her husband by more than a decade, and she remained in the public eye on accounts of some controversies regarding the authenticity of writings attributed to Stravinsky, and over the disposition of his multimillion-dollar estate.