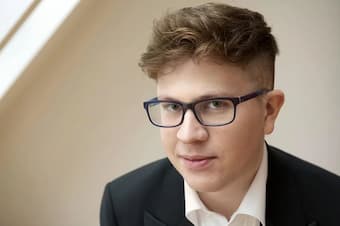 Israeli pianist Yehuda Inbar, currently based in Berlin, is an internationally renowned young performer, and the artistic director of the Akko International Chamber Music and Jazz Festival in Israel. His debut album, released in 2019, featured the music of Schubert paired with contemporary responses by Jörg Widmann and Michael Finnissy, and I talk to him about his love for Schubert, along with his interesting new discoveries during the last year of lockdowns.

Undoubtedly, it has been tough for musicians worldwide. Performances have been cancelled and postponed, and even now the future is uncertain. What does Yehuda miss the most about making music with an audience?

‘When you listen at home, the listening is a little bit more fragmentary,’ he explains. ‘We listen to small [things] more and more because of social media, but when you go to concerts, it’s really all about this extended experience of listening to music. […] I feel that listening to big pieces is really more about experiencing it, and this is something that we really don’t have now.

‘As a performer when you play, there are things that would only happen in a live performance, for sure,’ says Yehuda – but this is not to say he is against the recent rise to prominence of streaming. ‘As with teaching, [streaming] cannot replace being with the same person and listening in the same room,’ he says. ‘It cannot replace it for sure, but it does add something. We have greater access to things that are happening. […] I think that some of it will stay, because you get a chance to virtually attend so many things around the world now.’

However, it seems that Yehuda has harnessed this newfound solitude to reevaluate his approach to music making. Even though performances are, unsurprisingly, a prominent part of the career of a concert pianist, Yehuda doesn’t see them as the end goal.

‘It’s like another station on the way,’ he says. ‘Especially as solo pianists, we’re used to working alone, we learn a piece and work on it for months and months, and one of the things I realised these days is that it never feels ready. There’s no point where you feel like, “Okay” […] It’s not a final destination, this performance. All the time it’s an ongoing journey.’

‘The performance is a rather small percent of your entire work,’ mentions Yehuda. ‘Of course it’s an important part and we learn from it’ – but with this said, Yehuda was thinking to himself, ‘if someone had told me that I could, regardless of this pandemic, from now on, only learn pieces at home and record and teach, and would I still continue to be a musician, without the reward of performing in public, I would for sure say yes, because all these pieces we admire so much, a lot of [them] were just written for the purpose of the music, not for performance.’ 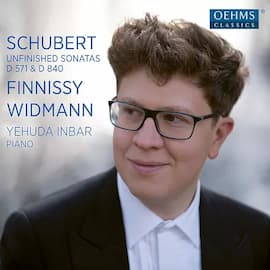 While certain concertos in the past may have been the product of a commission for Mozart or Beethoven, for example, there was also a lot music that wasn’t conceived with a performance in mind, and Yehuda has translated this across to his deep interest in Schubert, a fascination that was sparked during his studies at the Royal Academy of Music in London with Joanna MacGregor.

Before the pandemic, Yehuda ‘was working a lot on late Schubert, learning all his sonatas, and […] none of his close friends knew he was writing those pieces, and they certainly weren’t about to be published right away. The whole notion of the “piano recital” didn’t really exist then, this public form that we know today, but still he did it, and it’s something that I try to remind myself of, especially these days, that there isn’t a close deadline to perfect towards a date or something.’

‘I don’t mean that it was not written for an audience. It was written for, let’s say, an imaginary audience, but it’s just that, for me, it’s remembering that he was writing it without a performance in mind, without a commission.

‘It’s quite helpful, I find, because somehow [you connect] to this total state of devotion to what you do regardless of if you’re going to get the possibility to share it immediately. In the beginning it was difficult, because when the lockdown started, we didn’t know how long it was going to last. […] It started around March, and then there were the performances in May, June, but it was uncertain whether it was going to happen or not, and this was very difficult for me in the beginning to get into “Shall I practice it or not”. But the moment I just got liberated from that and [thought] “Ok, I’ll do it regardless”, I just learned these pieces anyway. It was much easier.’

With the decreased pressure of learning pieces for deadlines, Yehuda feels freer from ‘the stress of practising something that you’re just about to play. It has benefits but it does not allow you to just very calmly look for new things, which is what I feel I’m doing now.’

And will this newfound serenity influence his approach to upcoming projects?

‘I think so. First of all I feel like during this whole period I’ve been sowing the seeds of the next recording project, because this stop in time that we had, it allows me personally to look a little bit further [and ask] what will I have learned after one and a half or two years.’

Yehuda’s upcoming plans include pairing pieces by Kurtág and Couperin, more late Schubert along with late Schumann, and also some chamber music. ‘I have the chance to prepare a lot of things because I’m not so stressed right now to focus on a short programme to bring to performance – I have the chance to work on more things in parallel, in a way.’

Of course, the future also holds hope for events that were cancelled due to the pandemic, not least the Akko Festival, which is in planning for the spring, all being well. The first lockdown saw a fruitful collaboration with Israeli composer Ari Ben Shabetai, and looking ahead, Yehuda hopes to be able to continue making time for his hobbies of gardening and reading (at the minute he’s growing courgettes on his apartment balcony and reading Life Plays with Me by David Grossman), and furthering his exploration of Schubert.

‘He just somehow makes us stop in time,’ says Yehuda. ‘This expansion of the moment that he does, he has such long, quiet pieces, and this just makes you look into yourself somehow, like what we’re experiencing right now.’