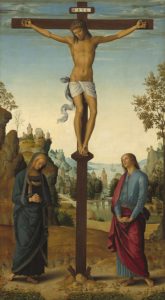 Although originally thought to have been written by Jacopo da Todi (ca. 1230-1306), the text may have predated him. However, by the 14th century, it was well-known in Europe. It was added to the Mass in the late 15th century, and then removed from the Mass by the Council of Trent in the mid-16th century. Pope Benedict XIII brought it back in 1727 and it remains now in the modern hymnals. Between 1700 and 1883, there are an estimated 100 settings of the text.

The poem, ‘Stabat mater dolorosa’ (Sorrowfully His Mother Stood), has some 20 verses of three lines apiece in an A-A-B rhyme, with 8-8-7 syllables per line: 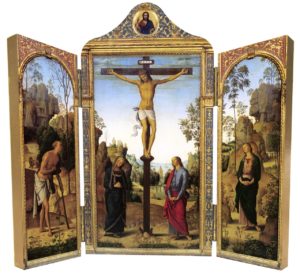 One of the most famous settings of the 18th century was that by Giovanni Pergolesi, who joined other 18th century composers such as Vivaldi, Scarlatti, and Haydn. Luigi Boccherini (1743-1805) first set the text in 1781 for an unknown occasion. At the time, he was in the employ of the Infante Don Luis in Spain. His first version was for soprano solo and was later revised for three voices in 1800.

The 1781 solo version may have been written for his wife, the soprano Clementina Pelicho. In all the previous versions of the Stabat mater, none were for solo voice and in creating this very intimate chamber music setting of a soprano and string quintet, he captured Mary’s darkest hour better than a choir or set of soloists could. Here, the emphasis is moved from the well-known poetry to the meaning of the poetry itself.

In creating this work for solo voice, rather than ensemble, Boccherini was able to use the flexibility of a single voice to add florid vocal ornamentation and even add improvised short cadenzas to what is already a technically demanding part. The voice frequently interacts with the first violin. The final verse, Quando corpus morierur, brings us to a breath taking conclusion of this song of sorrow and mourning.


By the end of the work, the poet is no longer describing Mary’s sorrow, but has inserted himself into the narrative, declaring that he, too, should follow Christ and be defended, to the end, by Mary. It’s a beautiful work, albeit not as well-known as it should be. 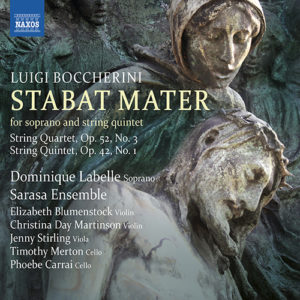