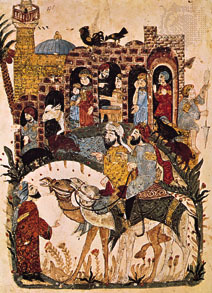 Discussion near a village
Credit: Wikipedia

Bilder aus Osten (Pictures from the East), 6 Impromptus for piano 4-hands, written 1848, came at a time in Schumann’s life when he was bothered by a number of problems. He had recurring bouts of tinnitus when all he could hear was the note ‘A’ in his ears, he had a fear of high places, and everything made of metal, including keys. His opera Genova didn’t succeed. On the plus side, his Association for Choral Singing was active in Dresden and Schumann contributed many works to its repertoire.

The ‘east’ that Schumann was picturing in this set of impromptus was an image inspired by Friedrich Rückert’s translation of a set of Arabic poetry. His translation of the maqāmāt of Al-Hariri of Basra (Hariris Makamen or Die Verwandlungen von Abu Serug) in 1826 attracted a great deal of attention. The maqāmāt by Al-Hariri of Basra is a set of 50 poems, in the form known as saj’, filled with rhymes and wordplay.

Schumann didn’t set the poetry but he did set the ideas of the poetry to music. You have to feel it in the music, though, because the only indications Schumann gives are for tempo or for interpretation. The movement titles are rather generic: Lively (twice), in a song-like manner, in a folk-like manner, not fast, and it’s up to the listener to place himself in the story. In his preface to the work, Schumann writes clearly of his debt to Hariri and compares the hero, Abu Seid, to the German Eulenspiel, the German trickster character. Yet we are only to consider the last piece, with our hero repentant at the end, as truly coming from the Hariri poetry.

The last movement, Reuig andächtig, starts off solemnly, winding down all the previous emotions, before concluding in a kind of quiet triumph.

Schumann: Bilder aus Osten, Op. 66: No. 6. Reuig andächtig (Elena Margolia and Arnulf von Arnim, piano)
Commentators have noted certain non-European aspects of the music and it’s interesting to consider the role of the composer as interpreter of the deeper meanings of poetry, particularly of non-western poetry.