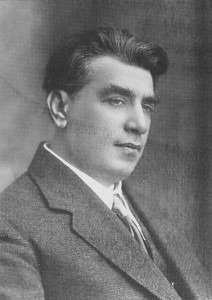 In our series of unsung concertos, here comes a composition that is actually sung but the words are not articulated! As we all know, the human voice has long been considered the quintessential musical instrument. Capable of producing an intricate array of sounds over an extended vocal range, the tone of the voice may be modulated to suggest a wide variety of emotions. Beginning in the 17th century, the French composers Jean-Baptiste Lully and Jean-Philippe Rameau wrote vocal exercises without words, which could be sung on one or more vowel sounds. And if you ever walked through a vocal studio or listened to an opera singer warming up, you know exactly what I mean! Primarily a pedagogical tool to improve vocal technique, these short wordless songs gradually became known as “Vocalise.”

Following in the footsteps of Sergei Rachmaninoff, Nikolai Medtner and Igor Stravinsky, the Soviet composer Reinhold Glière (1875-1956) wrote his “Vocalise” in 1943. However, Glière’s composition is crucially different from those of his predecessors. Rather than relying on a simple piano accompaniment, Glière utilizes a symphony orchestra and ultimately turns his Vocalise into a full-scale concerto. Dedicated to the Russian cellist Sviatoslav Knushevitsky, the Concerto in F Minor for Coloratura Soprano and Orchestra is cast in two movements. Surprisingly, Glière gives no instruction about the type of vocal sounds required, and there are no provisions in the score for actually taking a breath. In the absence of text, musical expression is left entirely up to the soprano. In fact, the whole composition is conceived as though the voice was an instrument of almost limitless possibilities. From the highly melancholy and lyrical “Andante” to the good-natured and humorous vocal brilliance of the “Allegro,” Glière fashioned a highly unusual composition full of ornamented arabesques and delicate vocal gymnastics. The work is reasonably popular, with every aspiring high-school soprano around the world taking a vocal stab! I hope, I will be forgiven for including this sung concerto under the “unsung concerto” heading!