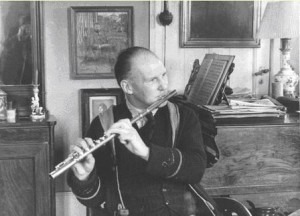 “The flute cannot deny its own nature, its home is in Arcadia and it prefers pastoral moods. Hence, the composer has to obey its gentle nature, unless he wants to be branded a barbarian.” That’s how Carl Nielsen, one of the most important and productive Scandinavian composers of the early 20th century, described the characteristics of this ancient instrument. Internationally, Nielsen was primarily known for his six symphonies, but events in 1922 significantly extended his compositional oeuvre. For one, he was diagnosed with a severe heart condition, and he reconciled with his wife after seven years of separation. He also completed a work for the Copenhagen Wind Quintet, and decided to write a concerto for each of the five players of the ensemble. The Flute Concerto was composed and premiered by Holger Gilbert-Jespersen, who had studied with the two masters Adolphe Hennebains and Philippe Gaubert in Paris. In later 1926, Nielsen was taking a cure in Italy, and the flute concerto gradually emerged during his time of travel.

In fact, the flute solo part arrived by post from Venice, and it was to be premiered in October 1926 in Paris. However, in September Nielsen fell ill and had to compose a temporary ending, replaced soon after the Paris premiere with the brilliant conclusion first heard in Copenhagen in January 1927. The Paris premiere was held at the Société des Concerts du Conservatoire, and for Nielsen it turned out to be a resounding success. Maurice Ravel and Arthur Honegger were in the audience, and the latter wrote in his review, “The flute concerto is full of beautiful combinations, for example the dialogue between the flute and timpani or the bassoon. We admire Carl Nielsen as a technician of the first rank and as an artist whose abundance of creativity is constantly renewed. His whole oeuvre gives the impression of wholesomeness, power and superiority. It was masterly performed with delicate tone—there was a standing ovation and soloist Gilbert Jespersen ‘flûtiste de grande classe’—was called several times.” Contrasting an idyllic past with a troubled present, Nielsen wrote, “Here in a nutshell is what I demand of all art—opposing forces which meet and glow, appearing one but remaining two, embracing and caressing like rippling water over pebbles, yet never actually touching and breaking the delicate interplay.”