When it comes to unconventional classical music, there are several composers that can be singled out. Some who would fit the bill are Philip Glass, Erik Satie, Stravinsky, Schoenberg and my favourite unorthodox composer, Heinrich Ignaz Franz Biber. 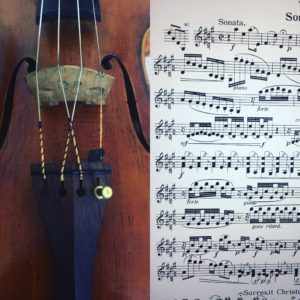 © Dan Russell from The Phoenix Collective

Born in the small Bohemian town of Wartenberg in 1644, there was no one like Biber. It’s not just his extraordinary ability as a violinist or his experiments with the alternate tuning system known as Scordatura, which alternates the tuning process to create a more responsive sound. Plus, you can add a special touch to your violin as Biber did for some of his religious music. It is his music that stands out as unorthodox, and, he has made some of the most affecting sounds ever created.

As much of his music holds this original and revolutionary quality, it’s hard to know where to begin to discuss his innovative style. Though, Biber’s Harmonia Artificiosa-Ariosa, Partia, VII, is a good place to start. From the very first notes, you will hear music that is unlike other tunes of his time, and perhaps even our time.


Well before Bach’s famous Partita in D minor for solo violin BWV 1004, which was written around 1720, there was Biber’s 1676 Passacaglia for solo violin. This is the last movement in his Rosary Sonatas. This piece feels so intimate it comes across as the composer is talking to us. It’s like he is having a one-on-one conversation with us and stating all his secrets.

Hearing this striking solo sound from so long ago, makes me wonder what we’ve lost in music. Since the almost 350 years that have passed since Biber wrote this piece, music has changed so much. Most of it is not as good or as interesting as Biber’s music. And I count myself among the composers who do not hold a candle to Biber. Why he is not as performed as Bach smacks of our ignorance. Unfortunately, the same can be said of many composers.

Each of the 15 sonatas had a title related to the Christian Rosary devotional practice. This stunning piece, and some say, the first major work for solo violin is a testament to his musical dexterity and brilliance.

You can find a deal of information on his life on the internet. However, to my astonishment, there is not one book ever written that is solely on the life and music of Biber. How blind we are.

Just how did Biber’s music get to be unorthodox? He didn’t have what could be classed as a radically different life from others of his time. I put it down to the study he devoted to his instrument, the violin. To quote Wikipedia, “His technique allowed him to easily reach the 6th and 7th positions, employ multiple stops in intricate polyphonic passages, and explore the various possibilities of scordatura tuning”.

Only when you know something inside out can you be unorthodox with it. Only then can you take your understanding and experimentation further, because the instrument is part of your music; it is not just something you make music on. The best composers are players.

Much of Biber’s violin music can be classed as virtuosic. This is evident in his Mystery Sonatas. His The Annunciation, from his first set of Rosary Sonatas, also known as his Mystery Sonatas, is truly astounding. The choice of instrumentation was probably selected because these were the instruments available to him at the time. But, the well-crafted compositional style, the perfectly clear voicing and expressive nature of the violin line make this the music of a master composer.

His Resurrection Sonata, again sings of that special something he owned. This is for violin, organ and bass trombone. How many other composers wrote music like his Batalia. This was the first battle of the musicians.

I feel Biber’s music is unorthodox, simply because the quality of his compositions sits above many other composers. His Missa Salisburgensis is a baroque masterpiece. Just imagine being there when this was performed in the amazing Salzburg Cathedral in 2018. It was originally performed in the same place in 1682.

This most stupendous music is thought to have been composed for the 1100th anniversary of the founding of the office of the archbishop of Salzburg in 1682; this colossal score rivals any mass ever written.

Like any music lover, I listen to thousands of hours of music, but few composers, actually, only a handful affect me the way that Biber does. The reason being, his music sounds like he is personally talking to me. It gets under my skin, in such a good way.

To me, and hopefully others, his music has a personal idiom that sounds individually expressive and brilliant. His technique is what amazes for his time. His violin scores require advanced technical resources to perform. The speed of his repeated notes, the wide leaps across strings, multiple double-stoppings, and brilliant cascading runs make for music far ahead of its time.

Perhaps being so highly developed at composing and playing is what makes Heinrich Ignaz Franz Biber so unorthodox. Can it be just practice that gets a composer this way? I don’t think so; there’s so much more you have to be.