Opinion
The Philosophy in Music I
by Rob J Kennedy January 10th, 2020 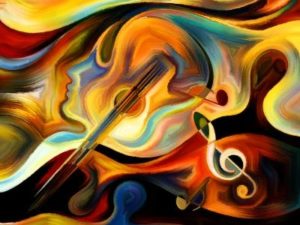 The philosophy of music is taught in some schools and universities. Stanford Encyclopedia of Philosophy has a wonderful resource on The Philosophy of Music. Philosophy is closely linked to religion; however, I’ve never found music religious, not even religious music. But, I do find music to be philosophical, especially classical music.

As a self-taught student of philosophy, I find that almost everything I have read and understood about philosophy has made little difference to the suffering of people in this world, nor has it eased my mind. While philosophy has opened my eyes, it has not changed the world.

Music, classical styled music, whether it is jazz, baroque, rock-and-roll, electronica or the pop form, for me is the most powerful of all philosophies. I have not even found that reading about the philosophy of music is as helpful in resolving my issues as opposed to actually listening to music.

Philosophical music can come in any genre or style. The Moody Blues are a group that espouses a strong philosophical ideal. Their philosophy is closely linked to the environment and the hope for our future generations. You can hear their thinking, values, and beliefs most poignantly in their albums To Our Children’s Children’s Children, and A Question of Balance.

Their classically influenced songs offer a human experience close to what I have felt throughout my life. So does the music of the baroque, and the romantic period. I have learned more about the way of the world, other people, and, I’ve gained a better understanding of myself through music than any other form of education.

I don’t know how many branches of philosophy, types of religions or styles of music there are, but I do know what affects and educates me better. For me, music is a philosophy that helps explain what life is about.

As I’m writing this, I’m listening to JS Bach’s Sonata in G Major BWV 1027 for viola da gamba and harpsichord. I heard it in a live performance for the first time recently; the Sydney Consort played it. This is what I wrote about the performance in my review.


“The sound of these two instruments by themselves produced a special kind of music. Really hearing the harpsichord and the viola da gamba, not just played so well, but being able to hear closely their individual voices in this delightful sonata was a musical highlight of the many Sydney Consort performances this reviewer has heard”.

The philosophy in music comes through stronger and more profoundly when experienced live. Live performances force you to concentrate on the music. Through the many thousands of concerts I have experienced, I always noticed people sitting with their eyes closed and letting the sound wash through them. One can almost see a physical change in some people. It certainly shows on their faces.

Like lyrics, music tells a story. But, with music, you decide the narrative. You have the power to choose what the music is telling you. Philosophy opens your mind to how other people view and understand the world. It makes you more compassionate and appreciative of your fellow human beings. But, not enough people study it; especially the leaders of our countries. Music can offer you a personal philosophy of the world. It can help unravel the mysteries and complexities of our lives. Music does this through its unspoken dialogue.

Funeral music will sum up a person’s life better than a eulogy can. Gustav Mahler’s Adagietto from his 5th Symphony was not designed as funeral music. It has been described as “A virtuosic orchestral portrayal of love”. But it works well as a sonic tribute to a person’s life.

At funerals, sometimes you won’t hear anyone cry until a piece of music that the departed loved is played. Camille Saint-Saëns Danse Macabre may not be the first piece of music that comes to mind when programming or requesting funeral music. However, it crosses a wide range of emotions that would represent many of the actions of a person’s life. This would help sum up a life perhaps more succinctly than a spoken homage. Plus, right at the end, with those two final plucked notes from the strings, it seems to say, ‘that’s it’.

All the words in the world can wash over you, but when you hear the music you love, you will feel more than what any words could ever say. There’s a lot that goes on between music and the listener which more often than not renders words ineffective. And, I think that this is something that music achieves better than other art forms.

Music can be a philosophy that helps you sort out the questions of life. It may even provide you with an answer to the meaning of life. However, you have to have open ears to hear the philosophy in music before it can educate your mind. And finally, to rewrite the words of one of the greatest writers ever, William Shakespeare, ‘there are more things in music, Horatio, than are dreamt of in your philosophy’.