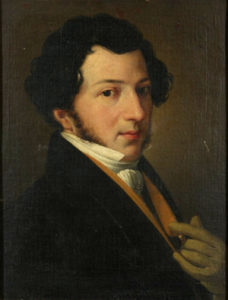 When we think of Gioachino Rossini, we think of his operas, his big works, however, there are a set of little-known early works that show us a very different side of the composer.

Gioachino Rossini (1792-1868) started his life in Pesaro. His father was a brass player and later a horn teacher at the Bologna Accademia. His mother was a singer and the young Rossini both played in the pit orchestra and joined his mother on stage singing. His opera career began in Venice in 1810 and by 1823, he’d turned his attention to Paris.

In 1804, however, when he was but 12, he wrote six string sonatas for 2 violins, cello and double-bass. The unusual scoring had to do with the instruments he had at hand. Written for a young merchant, Agostino Triossi, they were played by Triossi on the double bass, two of Triossi’s cousins on cello and first violin, with Rossini on second violin.

The first sonata, in G major, gives every instrument a chance to shine, starting with the first violin’s opening, a brief appearance of the cello, a bit of melody for the second violin, and then closes the exposition with material for the double bass.

Rossini: String Sonata No. 1 in G major: I. Moderato (I Musici)


What we hear presages the Rossini we will come to know through his operas, such as a lyrical line that extends to a new voice and an underlying humour that will come out more fully later in his career. The works place unusual emphasis on the double bass, first because a double bass isn’t a typical instrument in a string quartet and secondly because that was the instrument of the dedicatee.

The second sonata in A major opens slowly and the violins bring in a sad and lovely melody that’s answered by the cello. Even in this work, we can imagine this in an opera setting.


In the final movement of the third sonata in C major, Rossini creates a variations movement that ends up sounding like the end to one of his comic operas.


The opening of the fourth string sonata again carries us into proto-operatic writing with the violin melody that is later answered by the cello. The movement ends with a ponderous scale in the double bass, putting the double-bass to the fore.


The E flat sonata puts the double bass in the spotlight again but it is the violin melody of the second movement that shows us how much Rossini had learned from his time studying the works of Mozart. It’s not Mozart, but it is Mozartian.


The last string sonata is the only one with a nickname, La tempest (The Tempest), and it is in the final movement that we get our storm, starting with the proverbial lull before the storm, a few bolts of lightning in the distance, the wind gradually picking up, some raindrops and then the full mock fury of a small 4-voice storm.


These weren’t the only pieces written by Rossini for Triossi. At the same time he wrote these string sonatas, he also wrote a Grand’overture obbligatg a contrabbasso (Grand overture with obbligato double bass) and the Sinfonia al Convcentello, a small symphony dedicated to the town by Ravenna where Triossi had his country house and where Rossini was staying with his parents when he wrote these works.

The works are pleasant diversions for a summer in the country and have become popular for small ensembles of varying kinds. Rossini published standard string quartet versions of the works in 1823 and 1824 in Paris and later in London. Arrangements have also been made by others for flute, violin, viola, and cello; for flute clarinet, bassoon, and horn; and for solo piano.

In the score, Rossini wrote his description of the works and their gestation, describing them as ‘six terrible sonatas that I wrote… in my earliest years, before I had even had any lessons in basso continuo. They were all composed and copied out in three days, and performed in a doggish manner by Triossi (double bass), his cousin Morri (first violin), the latter’s brother (cello), and myself as second violin – no less doggish than the others.’ We no longer believe Rossini’s word on this!