“Nur wer die Sehnsucht kennt” (Only he who knows longing) is one of four Mignon songs in Goethe’s Wilhelm Meister written in 1795. These songs are symbolic, because they are sung and not recited by the main characters. The episode of Mignon and the harper brings together the heroine and her father disguised as the harper Lotario. Mignon longs for her fatherland, and the harper for finding his daughter. This distinct section in Wilhelm Meister has inspired countless musical settings. Mignon and the Harper express feelings of nostalgia and longing. Of course, it also expresses Goethe’s own longing for Italy and the indefinable search for a better world that gave the Romantic Movement its unique mode of expression. Goethe described Mignon’s performance of this Lied as an “irregular duet sung with the most heartfelt expression. 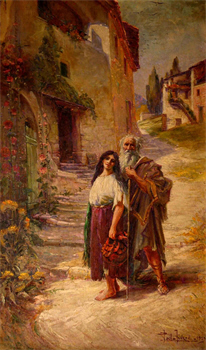 Mignon and the Harper by Paul Levere, 1923

There is a strong sense of circularity in the poem, suggested by the rhyme scheme and the meaning of the text. Literary scholars have found “a progression from a first general statement about the emotion of longing to a statement about the specific inner state of the speaker, and finally through the repetition of the first lines, attention is focused once more on the speaker. 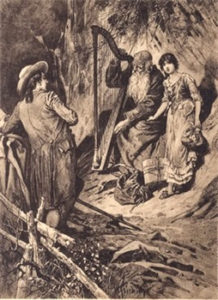 Franz Schubert certainly felt irresistibly drawn to this poem. In fact, he set this poem to music no fewer than six times. The first setting exists in two versions and dates from 1815. The second and third settings were composed one year later, and the fourth setting in 1819. His last two settings, one is a duet obedient to Goethe’s description, and the famous solo song emerged in 1826 and were published as part of Op. 62. It has been suggested that “Schubert’s struggles with this poem were heroic and full of love; it was as if he identified strongly with Mignon’s plight, and the way that her sufferings, like his, were private ones, a burden of woe unshared.” In Schubert’s multiple settings he spent the better part of a decade contemplating how best to catch the spirit of the girl’s grief in music. It probably comes as no surprise that his final setting in 1826 is also his simplest and most emotionally moving. Since the poem flows in one continuous stanza, Schubert allows his musical material to appear continuously, only recalling the singer’s opening melody when the text is repeated at the end. The B-flat octaves in the introduction and final postlude imply a mournful dislocation, and while Mignon is telling us about her great loneliness, the piano explores the dissonant reality of solitude. 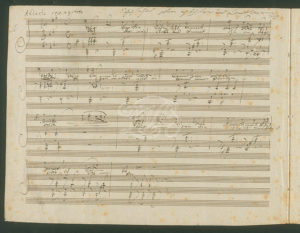 The sense of yearning and longing held much fascination for Beethoven. Six of his songs for solo voice bear the title “Sehnsucht,” and a good many others including “An die ferne Geliebte,” deal with themes of longing and desire. “Nur wer die Sehnsucht kennt” is rich in musical and dramatic possibilities, and Beethoven set this particular poem four times. All four settings were published in 1810, and the autograph of the four settings contains a rather curious inscription. “I did not have enough time to produce a good one,” Beethoven writes, “so here are several attempts.” Goethe repeats the first two lines of the poem at the very end, and this repetition served Beethoven as a structural key. While the first three settings are strophic, Beethoven’s final effort is through composed. This final effort reflects various elements already heard in Nos. 1-3, and includes a distinct independence between voice and the piano, the clear establishment of 6/8 meter in the accompaniment, and a literal reprise of the first two lines. And predictably, the through- composed version allows Beethoven to explore the differences in meaning between the two stanzas.

Mignon and the Harper / Photogravure from the painting by C. V. Bodenhausen

Like Beethoven, Robert Schumann focuses on the idea of longing in the poem by emphasizing the recurrence of musical motives. Composed in 1849, the poem was set during a time when the composers developed a much broader and more varied range to his setting of poetic texts. In essence, Schumann transformed his lieder—in response to his metaphorical interpretation of the text—from a lyric into a dramatic genre. Surprisingly, Schumann omits the piano prelude and the text is twice repeated with slightly different melodic material. Poetic lines are not clearly demarcated and thereby create a sense of circularity and continuity that matches the nature of the poem.

Tchaikovsky composed his setting in 1869, but he emotionally extends Schumann’s expressions through rich textures and passionate outbursts in the vocal part. His focus is not the sense of yearning, but the loneliness expressed by Mignon. He divides the poem into three musical sections, but his musical reading is through composed with careful repetition of melodic materials. The piano prelude sets the tone, and quick modulations imply the remoteness of the beloved. Through careful repetition of poetic lines, Tchaikovsky portrays the loneliness evoked in the poem, and his reading builds towards this substantial climax.