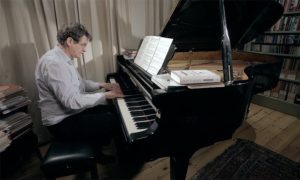 I’m a returner pianist – and maybe, if you’re reading this article, you are too and therefore what follows will resonate with you. Or perhaps you are thinking of taking up the piano again after a long absence (as I did), in which case you should definitely read on…..

I played at a piano club recently and during the coffee break someone asked me if I was “a professional pianist”. This gave me a momentary glow of pride and ego – evidently I had played well and “made an impression” – and I know that many amateurs dream of reaching the dizzy heights of ‘professional standard’ in their playing. It’s one of the things that keeps us motivated to practice; alone with that box of wood and wires we dream of playing to a full house at the Wigmore or Carnegie Hall.


So I replied that no, I was an amateur pianist, an adult ‘returner’ and that I had given up the piano at the age of nineteen when I left home to go to university, returning to it just shy of my fortieth birthday with an all-consuming passion for the instrument, those who play it and its vast and varied literature.

When you tell people you’ve taken up the piano again they always ask, “Are you any good?” And I never know quite what to say. Some days when my spirit and fingers are in sympathy with each other, I think I make a reasonable sound. On other days, spirit and fingers aren’t on speaking terms and the result is fumbling, dismal, depressing.
– Alan Rusbridger, journalist and amateur pianist

The world of the adult amateur pianist is a curious one – at once rich, vibrant and varied, but also obsessive, anxious and eccentric and when I put out a call for contributions to this article, I was deluged with responses as varied, fascinating and moving as the literature of the instrument we play. What follows are just a few of the responses, but what they demonstrate is that, while there are some obvious common threads, the reasons for returning to and playing the piano are often deeply personal and hugely meaningful, and that a passion for the piano is all-consuming. Never forget that the word “amateur” derives from the Old French word meaning “lover of” from the Latin amator: all the amateur pianists I meet and know play the piano because they love it and care passionately about it. Love drives commitment to the instrument – amateur pianists are possibly the most dedicated practicers – and many amateurs are absorbed by a compelling need to get better, to progress, to master. It’s a lonely road to travel, but those who commit to the journey do so willingly, and it’s an ongoing process, one which can provide immense satisfaction, stimulation and surprising creativity. 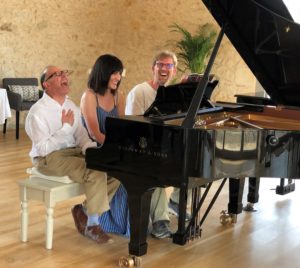 That is not to say that professional pianists don’t love the piano too – of course they do, otherwise they wouldn’t do it, but a number of concert pianists whom I’ve interviewed and know personally have expressed a certain frustration at the demands of the profession – producing programmes to order, the travelling, the expectations of audiences, promoters, agents etc, which can obscure the love for the piano. Because of this, professionals are often quite envious of the freedom amateur pianists have to indulge their passion, to play whatever repertoire they choose and to play purely for pleasure.

Now, back to those inspiring adult returners…..

My primary reason for returning was that both my parents had lived the last ten or twelve years of their lives with advancing dementia, as well as some second degree relatives. I thought the best way to really work my brain was to go back to playing music. The secondary reason was to help relieve stress which was something my piano teacher had told me I would need at some point in my life……For me, having started to suffer the lacunar strokes in my family history which have a type of dementia related to them, I keep hold on the fact that the part of the brain that works with music is usually the last to fail. I still feel that playing the piano is probably one of the best avenues to take to keep working the brain. Apart from that I simply love playing again.
– Eleanor

It was the death of an uncle which prompted me to return to the piano. He was very musical, and after he died my other uncle asked me whether I would like his piano, a rather fine Steinway grand which had been in the family for ages. However, grand pianos are somewhat incompatible with the three bedroom semi in which I live, but it did remind me how much I’d enjoyed the piano. I was lucky enough to be left some money in his will, and with that I bought a Yamaha upright with silent system fitted. I wanted a proper acoustic, but I have young children so a silent system means I can practice at night after they are in bed. I have lessons once a fortnight and they are completely indispensable for my enjoyment.
– Sarah

I studied music at university and did two years of a performance major but struggled with various chronic injuries and dropped out as a result (I had two operations and had seen many medical specialists in attempt to resolve these problems). I then “sold my soul” to capitalism and started a business, following which I continued along a corporate career. I had always dreamed of getting back into playing but my schedule was punishing and not at all conducive to playing. I started to play again and unfortunately ended up with RSI (tennis elbow) which swiftly ended my return to playing. Then a few years later I managed to extricate myself from the corporate world and…..I managed to start playing again and although I had some niggles from the RSI, was able to play around 0.5 – 1 hrs a few days a week. I also started going for lessons with [a teacher who] focussed very much on reducing tension…..and I realised how much of my injuries came down to poor technique and tension. I wish a greater emphasis had been placed on this when I was a music student because while [my teacher] helped me find a much more natural, comfortable way to play, it was already too late and my RSI flared up again to the point where a few minutes of playing would leave me in agony for days. It was devastating after so long of trying to be in a position to have the time to play that I wasn’t able to. A few years later (whilst consistently seeing medical specialists and trying various approaches) I managed to have a breakthrough in which I was able to slowly start playing again, a few minutes every second day and was able to gradually build up. This was a useful exercise in that I had to be more focussed on practising effectively given the limited time available. Despite being told by numerous doctors that I wouldn’t play again, I’m now able to play for up to an hour on some days. This has been sufficient to learn some new repertoire and to perform in some amateur meet-up groups which has really been a wonderful experience. In fact, once I was able to let go of the inner critic (as a former music student, the inner critic remains highly developed even though one’s technical ability wanes without practice!), I couldn’t believe how much I enjoyed playing. It would have never have occurred to me all those years ago when I dropped out of university that I’d be able to derive so much enjoyment out of playing as an amateur.
– Ryan

I originally started piano lessons aged 13, of my own volition; I’d had one of those 80s electronic keyboards that were all the rage back then, and wanted to progress to something more substantial. My progress was very slow, however, and ultimately not very fulfilling. I managed to pass my Grade 1 but found the exam experience stressful. I think a lot of it had to do with the prescriptive way children are typically taught: everything was just scales, sight reading and set pieces that weren’t especially fun or engaging to play. Nearly twenty years later, I was in a piano bar on holiday, and the pianist was playing modern music set to piano. It was beautiful, and I felt a sense of regret that I had abandoned such a beautiful instrument. On returning home, I did a spot of research and found that digital pianos had come on a long way in the intervening years and were now touch-sensitive with weighted keys and even a sustain pedal. I took the plunge, ordered a decent model (the Yamaha P115) and signed up for lessons with a local teacher. It’s been a wonderful decision, and I have fallen in love with playing. It’s still small steps, but I practice regularly and have actively witnessed improvement in my own playing.
– Colin

I discovered classical music as a teen (Bach) and started taking lessons. I wanted to be a composer, and eventually became a composition major at a local university. Having started late, and not having received family support and good advice from those who did support me, I let my insecurities defeat me, and I ended up getting a degree in English. Decades later, we inherited a spinet from a relative, and I found my passion once again. I finally have a good teacher, and am making progress toward being the pianist I wanted to be.
– Bob

My piano journey has been relatively straightforward compared to some of the accounts of other adult returner pianists, but we are all on our own personal path, some of us supported by teachers, others choosing to “go it alone”, but all driven by a common, consuming passion for the piano.