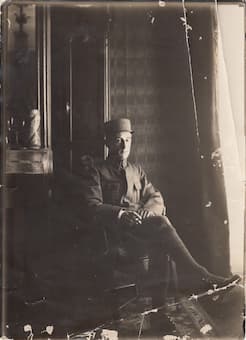 Ravel in uniform in 1916 at the house of Mme. Dreyfus

The Great War, as World War I was known at the time, inspired many works of music, often set to poetry. Maurice Ravel took inspiration from his many dead friends to create a piano work, Le tombeau de Couperin (1914-1917), that is oddly light-hearted. Not light-hearted in an uncaring way, but light-hearted in memorial way for, as Ravel said, ‘The dead are sad enough, in their eternal silence.’

The structure of the work, as referred to in the title’s reference to Couperin, is that of a Baroque dance suite. He wasn’t paying homage to Couperin as much as giving his audience an idea of what this 20th-century work was invoking.

Each movement is dedicated to an individual that Ravel knew. They were not only fellow musicians but also childhood friends, musicologists, and painters.

Movement I, the Prélude, sets the light tone. It is dedicated to First Lieutenant Jacques Charlot, who had made the transcription of Ravel’s Mother Goose Suite for piano solo, and the piano duet transcription of Menuet sur le nom de Haydn. He was related to Ravel’s publisher, Jacques Durand, and a friend of Ravel’s. Ravel’s En blanc et noir had its second movement dedicated to him. He was killed on 3 March 1915.


The three-voice fugue that follows is dedicated to Second Lieutenant Jean Cruppi. His full name was Jean-Louis Cruppi and he was the son of the French politician Jean Cruppi and Louise Cruppi. Louise Cruppi had been the dedicatee of L’heure espagnole in 1907. She had taken piano lessons with Gabriel Fauré and was considered musically talented. After her marriage to Jean Cruppi, she hosted an important music salon at her home and encouraged Ravel in his early work. 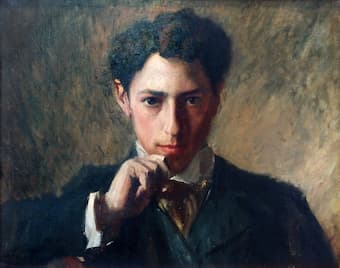 The third movement, Forlane, was the first movement that Ravel began with in 1914. It is dedicated to First Lieutenant Gabriel Deluc, who had joined the French army as a medic in 1914 and then joined the troops in 1915. He was a painter from the Basque region in southern France and while in the trenches made many drawings. He was killed on 15 September 1916. The Forlane was an old Venetian dance form that had been brought back to the dance floor through the actions of Pope Pius X (1835-1914), who in 1913 declared the tango to be immoral and as off-limits to Catholics. When his ruling proved unpopular, the pope called the tango ‘dull’ and recommended the forlana (forlane), a dance that had been popular from the late 1690s to about 1750, as its replacement.


The Rigaudon of Movement IV is dedicated to Pierre and Pascal Gaudin, two childhood friends of Ravel, who were killed by the same shell on 12 November 1914, the first day they arrived at the front. Ravel was a long-time correspondent with the brothers’ sisters, Marie Gaudin and Jane Courteault.


The Menuet movement is dedicated to Jean Dreyfus, the stepson of Fernand Dreyfus, at whose house he recuperated after he left the army and after his mother’s death. Jean was also the stepbrother of the musicologist Roland-Manuel. Ravel’s war-time letters to Mme. Dreyfus are remarkable for their personal reflections on the war. It was at the Dreyfus house that Ravel completed Le Tombeau de Couperin.

The final movement, Toccata, is dedicated to the husband of his piano teacher at the Conservatoire, Marguerite Long. Joseph de Marliave was a musicologist with a specialty on Beethoven’s string quartets. He was a close friend of Gabriel Fauré, who wrote the preface to the first edition of Marliave’s string quartet book. Marliave was killed on 24 August 1914, less than one month after the beginning of the war on 28 July 1914. He was a captain of the 20th company of the 214th infantry regiment. 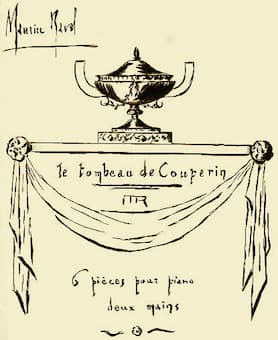 Cover of the first edition of Le Tombeau de Couperin (1918)

That the work is a memorial is attested to not only by its name (tombeau) but also by the artwork on the cover of the first edition, designed by Ravel himself.

Yet, despite the prevailing key of E minor, the Rigaudon and Menuet movements are in major keys. The final movement begins in E minor but finishes on a triumphant E major. This takes the work out of the real of sorrow and into the world of memory – and the happy times these friends had had with Ravel, rather than the pain of their loss. It was his teacher Marguerite Long who pointed out that ‘Le Tombeau contains no laments or funeral-march rhythms, and that its joyful character evokes the love of life felt by all these men who died so young.’ The work was given its premiere by Marguerite Long at the Salle Gaveau in Paris on 11 April 1919. This is important because, at the death of her husband, Marguerite Long had virtually stopped playing the piano and it was Ravel who brought her back to the keyboard to do this premiere.

In 1919, Ravel transcribed four of the six movements for orchestra, omitting the second movement Fugue and the sixth movement Toccata. It is thought he omitted those movements as being too pianistic to be orchestrated. He also changed the order of the work, closing the work with the Rigaudon. The orchestra version was given its premiere in Paris on 28 February 1920.