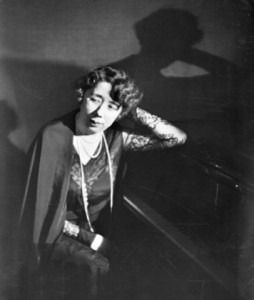 When Ravel wrote his piano suite Le Tombeau de Couperin in memory of the soldiers of the Great War, the first performance in Paris in 1919 was given by the Marguerite Long, who was the widow of Joseph de Marliave, one of the musicians memorialized by Ravel. The final movement, No. 6. Toccata, was dedicated to Marliave.

Ravel: Le tombeau de Couperin: No. 6. Toccata (Akiko Ebi, piano)
Long (1874-1966) studied at the Paris Conservatoire with Henri Fissot, taking a Premier prix in 1891, and returning to the Conservatoire to teach from 1906 to 1940. From 1920, she was professor of piano at the Conservatoire, becoming the first woman professor at the Paris Conservatoire. She also founded her own private music school where she was joined in 1940 by violinist Jacques Thibaud, eventually establishing the Long-Thibaud Competition in 1943 – winners have included Paul Badura-Skoda (piano), Vladimir Feltsman (piano), György Pauk (violin), and Kristóf Baráti (violin), among many others.

In this recording of the Fauré second piano quartet, Long is the pianist and Thibuad the violinist, joined by Pierre Fournier on cello and Maurice Vieux on viola.

Fauré: Piano Quartet No. 2 in G Minor, Op. 45, III. Adagio non troppo (Jacques Thibaud, violin; Maurice Vieux, viola; Pierre Fournier, cello; Marguerite Long, piano)
Although she was considered one of the great interpreters of the music of Chopin, Liszt, Mozart, and Beethoven and others, she also devoted a great deal of her time to performing the music of her contemporaries such as Debussy, Fauré, Ravel, and Milhaud. Ravel dedicated his Concerto in G major to her, as did Milhaud his First Piano Concerto.

Given Long’s ties to the Conservatoire and the classical basis of the teaching there, it’s a joy to hear her in Ravel’s jazz-influenced work. There are clear ties to Gershwin’s earlier Rhapsody in Blue, but this is definitely modern music in the hands of French masters, both in the score and at the keyboard.