Artists Interviews
In touch with The King’s Singers
Kings of A Capella
by Jenny Lee May 18th, 2014 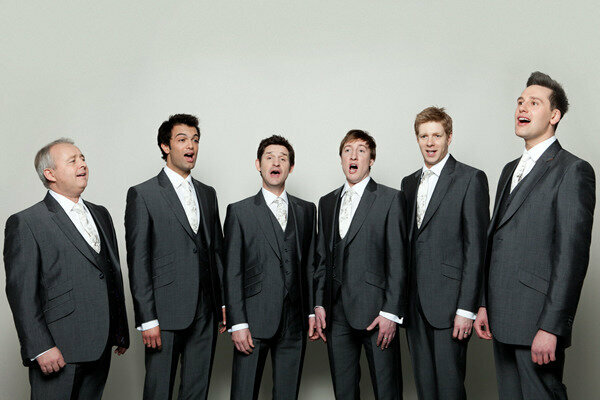 Taking its name from their alma mater King’s College Cambridge, The King’s Singers was officially formed in 1968. It all began with six choral scholars singing six days a week in the college chapel, performing at dinners and balls, as well as reading university degrees. In 1965, they first named themselves as Schola Cantorum Pro Musica Profana in Cantabridgiense and made an album. Although it was not a best seller, a copy found its way into the hands of Sir Neville Marriner. A concert at Hale Park was then arranged. In 1968, a great opportunity was offered to the boys – a London debut at the Queen Elizabeth Hall with the Academy of St Martin-in-the-Fields and organist Simon Preston; this inspired them to rethink an official name. So between The King’s Singers and The King’s Swingers, they chose the former, and with this name and their ‘voices of spun gold’, they have dazzled audience around the world ever since. The King’s Singers will be in Hong Kong to perform with the City Chamber Orchestra of Hong Kong in May. This concert is special because soon after this Asian tour, Paul Phoenix, one of the longest-serving members, will retire from the group with which he has had 17 glorifying years.

Would you tell us more about John Rutter’s The Wind in the Willows, which was composed specially for your group?

John Rutter was a particularly good friend of the original King’s Singers and in the late ’70s there was a highly successful collaboration between the group and the composer culminating in the re-telling of Kenneth Grahame’s The Reluctant Dragon. In 1981 The King’s Singers teamed up again with Rutter to transform another Grahame fable, The Wind in the Willows into the concert version we are performing in Hong Kong this year, complete with narrator and orchestration. It’s a fun work and there is plenty for the whole family to enjoy!

Apart from Rutter’s work, you are also bringing some English folksongs, Italian Madrigals and American jazz. Would you change the way you sing to adapt to different style?

We believe that it is very important to approach each musical genre with integrity. This approach encompasses all the details of language, stylistic requirements of pitch, tempo, mood and character, all the while making sure the delivery of the text and the composer’s intentions remain of utmost importance.

In terms of programming, I know that most of your concerts are divided into five distinct groups of pieces, or as ‘concept programmes’. What is the idea behind this structure?

To be honest, the ‘formula’ for what is an effective programme changes depending on the request of the individual promoters. Many promoters enjoy a snapshot of our repertoire and so it can work well having a taste of various musical genres such as Madrigals, Renaissance Polyphony, Romantic music, Twentieth Century, Contemporary, Folk, Jazz and Pop. We like to finish our concerts with a selection of some of our favourite Close Harmony pieces that are well-known and loved throughout the world. In terms of the ‘concept programmes’, these tend to be projects the group wants to undertake for musical reasons and are very much artistically driven, rather than perhaps reasons such as its popularity.

Would you explain your famous ‘Pyramid of Sound’?

I’m not sure who coined this phrase (maybe we did?!) but it stems from the group being made up of one bass, two baritones, a tenor and two countertenors. Perhaps the obvious setup for a sextet would be to have a bass and baritone, two tenors and two countertenors. For us, the ‘added’ baritone enables us to create more width and depth to our sound. The two baritones and bass allow the top three parts to sit on top of the bed of sound created for them and, given that higher-pitched voices are heard more easily, the effect to the audience is one of complete balance in the overall chordal sound, despite being ‘outnumbered’ by their lower-pitched colleagues! 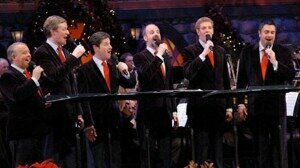 Since 1968, your group has changed members. What quality do you look for in a new member? How do you usually find a new member?

Firstly, the sound is the all-important feature. They have to be able to do the on-stage job. That is to say, they need to have a flexible instrument in order to deliver the vast repertoire of musical styles in a convincing manner. We sing in many languages so it is important that they have an ear for the nuances of each language and even, at times, the various dialects of the same language. Off-stage, we all have jobs to help run the business in an efficient way. The individual jobs take up a great deal of time so it is important that we all contribute positively to the non-vocal requirements of being a King’s Singer. When a King’s Singer decides they want to leave the group we speak to our friends and colleagues in the musical world and ask for recommendations. We draw up a list of potential candidates and approach them to audition for us. When we say ‘for’ us, it’s more like ‘with’ us as the entire audition process is collaborative. We know that they could all sing an impressive solo but for us the most important feature is how they fit into the existing ensemble.

Paul Phoenix, one of the longest serving members, will retire after this Asian tour. How has he contributed to the development of the group?

Paul will be remembered as a King’s Singer who gave everything to the job. He is the consummate professional and his real skill is communication and engaging with the audience. People feel at ease listening to him and also talking with him in person, something concert goers enjoy doing after every show when we come out to meet them. Of all the King’s Singers in the past 46 years, Paul’s Pop singing sets him apart. He’s going to be a hard act to follow!

What is the biggest challenge in a capella singing?

Listening. This is the single most important skill and challenge, at the same time. With it, amazing music can be achieved and the constant challenge is to react to what is going on around you. Going into ‘auto pilot’ is something we’ve all done in our musical and professional careers and so it is a constant challenge to be aware of everyone around you and tuning in to what they are doing. The success of a group can be put down to how well they listen to one another.

If you use a colour to describe each member, what will you choose and why?

The Kings’ Singers will be performing in Hong Kong on May 23rd and 24th.

John Rutter
The Winds in the Willow