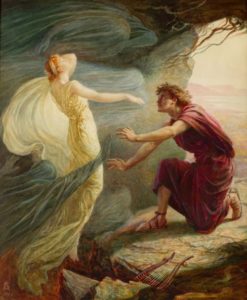 One of the most dramatic scenes in an opera is the announcement of the hero or heroine’s death. It’s a striking point where histrionics come to the fore and emotions run rampant.

These scenes were present even in the earliest operas In Monteverdi’s L’Orfeo, Orfeo learns of his wife’s death at the fangs of a snake, hidden in the grass.

The scene opens with the arrival of a messenger with the bad news and then Orfeo cries out in disbelief: Tu, sei morta…. [You are dead, my life, and I still breathe?]. The aria is an exquisite rendition of his pain – from the depths of his despair, he gains resolve to confront the ‘King of Shadows,’ Pluto in Hades, and get Euridice back again. He concludes with a farewell to the sky and sun as he vows to descend to the underworld. 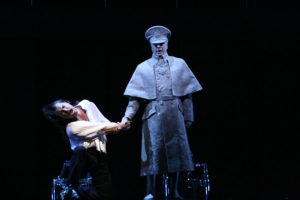 You may think this slight on comparison with much later operas, but this is 1607 and opera is still in its infancy.

In a survey of opera, one writer notes that death in opera comes primarily from murder, followed by suicide, then illness, and the all-encompassing other (including Euridice’s fatal snake bite).

At the end of Mozart’s opera Don Giovanni of 1787, the announcement of death is made by the memorial statue of the Commendatore, killed in the first scene of the opera, invited to dinner in the third scene of the 2nd act, and comes knocking in the final act. As befits the honorable man, he offers Don Giovanni redemption if he would repent, but Don Giovanni, a rascal to the end, refuses and is dragged down to Hell, accompanied by a chorus of demons. 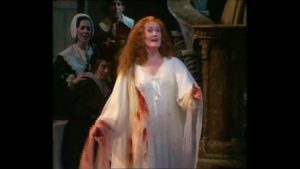 Dame Joan Sutherland as Lucia in the Mad Scene

We jump ahead to the high point of bel canto in the hands of that consummate master Gaetano Donizetti.

1835, in Donizetti’s Lucia di Lammermoor, Lucia is forced by her brother Henry to marry. On her wedding night, she goes insane, kills her groom, and then, famously, comes back to the wedding party in her bloody (white) nightgown, sings her Mad Aria, and then collapses. The aria, “Spargi d’amaro pianto,” has made the name of more than one soprano, the most famous recently being Joan Sutherland. 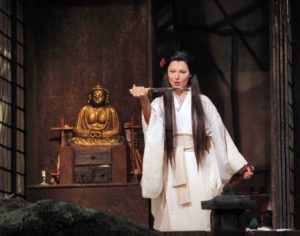 Leaping to the 20th century we have Puccini’s Madama Butterfly, of 1904. Madama Butterfly is left with her child, Trouble, after her naval officer, Pinkerton, goes on extended leave. She first tenderly describes how she will welcome him back in Un bel dì (One beautiful day). But, when he does return, it is with his new American wife and he wants to take back his child. She agrees, but, at the same time, has taken her father’s suicide knife and plans to kill herself, feeling that she’s lost all her honour. She covers the child’s eyes and dies by his side to be discovered by Pinkerton, who cries out her name.

Death by serpent, death by statue, death by crazed bride, suicide. Welcome to the dangerous world of opera!