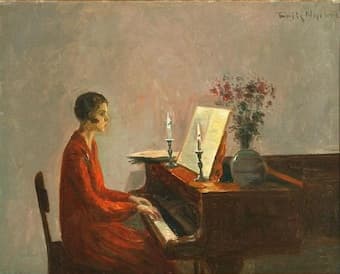 Amidst all the great works for piano – the concertos and sonatas, themes and variations and suites – the miniature, a small work just a few minutes long, is often overlooked. Yet the genre includes some of the best and most exquisite music in the piano’s repertoire, pieces which reveal their composer’s distinctive character and style in microcosm.

The miniature became popular in the nineteenth century when piano manufacture was developing fast and composers wrote for a growing market of keen amateur pianists who enjoyed playing at home. But many miniatures are far from “amateur” pieces; they are inventive, often virtuosic, musical gems in their own right.

This bagatelle (the word means a short, unpretentious piece) comes from the opus 126 set, written towards the end of Beethoven’s life and it shares the other-wordliness of the late piano sonatas, in particular the serenity of the opening movement of the Op 110.

The full range of Schubert’s bittersweet emotional landscape is on display in this miniature, from yearning to tenderness, poignancy to warm intimacy.

The middle piece in Grant Still’s Three Visions, Summerland is a miniature of exquisite serenity, tenderness and reflection, infused with jazz harmonies. It is intended as a musical portrait of promised beauty in the afterlife.

Australian-born contemporary composer Sadie Harrison’s music is lyrical and inventive. This piece incorporates elements drawn from Chopin’s nocturnes (trills and ornaments, for example), and the “nocturnal sounds” as expressed in the night musicks of Bartók and Britten. Nocturne II Lachrymae is based closely on John Dowland’s Lachrymae Pavan for lute and is slow, melancholy and intimate in character, its theme recurring throughout the piece to represent the sadness of loss, the hope of a remembered dream and a sad reawakening. 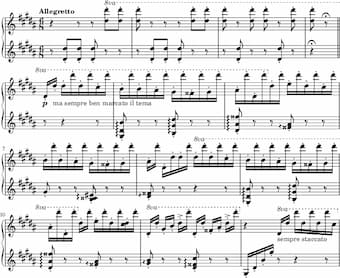 La Campanella (“the little bell”) is the nickname of Liszt’s third of his six Grandes études de Paganini. It’s one of his well-known and best loved pieces, and is a popular encore, being both brief and highly virtuosic in both its tempo and large leaps. In it, Liszt brilliantly captures the tinkling of bells in a series of variations on a simple but lyrical theme. It’s a sparkling piece, full of wit and character.

Written a year before Clara married her beloved Robert, the first of her three Romances, Op. 11 are tinged with melancholy, but the third, in warm A-flat major, is intimate, a little wistful, and clearly imbued with affection for her husband-to-be.