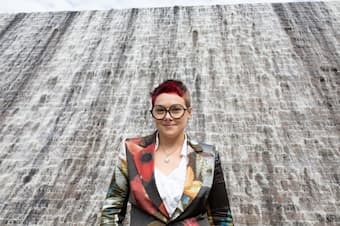 At the Royal Festival Hall in London on Friday, 9 July, the focus of the concert will be the current climate situation. Composer Laura Bowler’s Houses Slide, commissioned by the London Sinfonietta, is a work for soprano and orchestra that ‘describes one woman’s intimate psychological journey to investigate her response to the climate emergency.’ One of the most direct reactions to the climate emergency will be that the performance of the work will be ‘off-grid,’ i.e., all house and stage lights and amplification will be powered by alternate means for the work. Ms. Bowler was encouraged in this work by director Katie Mitchell, who had worked on other productions that used this same alternative means of power.

The alternate means will be pedal power. On-stage bicycles, provided by Vivid Design Works, will be used to generate energy for the work. 16 bicycles will be in action with the soloist on one of the bikes. Work on the technical part of the energy side was done by Colin Tonks, director of Electric Pedals, who did the math to determine how many bikes were needed for lights, how many for the mikes, and how many for the background electricity. 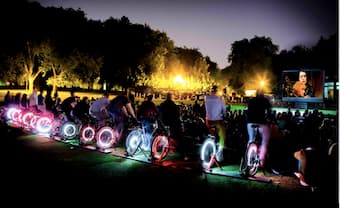 One of the critical parts of Houses Slide was a questionnaire that went up on the London Sinfonietta site asking their audience to send in written, audio or video files addressing questions of climate change – these recordings, pored over and arranged by Ms. Bowler, form the core of the first movement, Epiphany. The recordings, received from all over the world from many climate change believers and a few climate deniers, function as an international barometer: some people do what they can, some people do more, some people do recycling but love their SUV, and others are simply paralyzed by the whole situation. During this audio movement, the soprano soloist is cycling along with the rest of the support cyclists, listening to the world speak.

The second movement, Immersion, brings us to the personal. Our cycling soprano, Jessica Aszodi, becomes our representative in the climate change conversation. The orchestral background changes to a rhythmic, driving, looping sound while Jessica quotes what she’s heard from the various speakers. This is her jump into the deep end of the complexity of the climate crisis.

The third movement, Depression, silences the ensemble and the singer descends from her bicycle to express Climate Grief and the realization that one person really cannot make any difference.

The final movement, Resolution, ends on a more positive note: you CAN do SOMETHING. The string ensemble goes microtonal over an uneasy harmony – this won’t be a happy, major-key ending, but more of a contemplative ending. 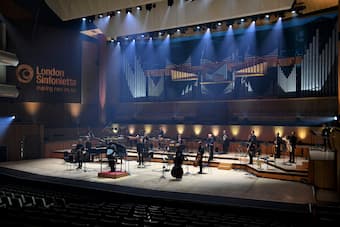 London Sinfonietta at the Southbank Centre

In our conversation with the composer, we asked how the process of writing this work affected her. Ms. Bowler said that her review, with librettist Cordelia Lynn, of the various audio and video submissions were very upsetting because of the very personal statements people were making about how climate change was affecting them personally and on a daily level. One person spoke of having to leave his country to escape the toll on his health of what was going on around him. People are seeing climate change as it affects them personally. The singer of the work is our Everywoman, and we, as the audience, become her followers in her journey through exposure to the topic, immersion into the details, depression at its size, and her resolution to be part of the change that we all have to accept.

The title of the work, Houses Slide, is a quotation from the libretto for the piece, written by playwright Cordelia Lynn. Houses = the Home = the Self and Slide = coastal subsidence as the waters rise and our own slide into depression at the problem.

A noted American meteorologist who has been working in the field of climate change when told about the project said, “I like it! This is an innovative example of performance art elevating understanding and internalization of critical global issues via the creation of unique and striking sensory experiences that will remain with their audience far beyond the performance itself.”

This is the new arts environment: audience ideas, audience participation, and a talented composer who brings it all together to make us reexamine our thoughts and knowledge about the international crisis for our generation.