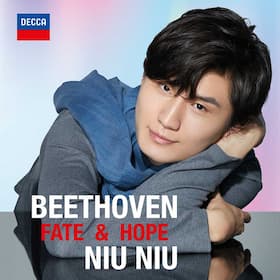 It’s been more than one year, and we (the classical music industry included) continue to be impacted by the pandemic. I believe most, if not all, of you will agree with me that music is desperately needed especially in these times, as music gives us all hope. This is pretty close to Niu Niu’s conception of this album. Titled Fate & Hope, this album features Liszt’s transcription of Beethoven’s Symphony No. 5, Beethoven’s “Moonlight” and “Pathétique” sonatas and Niu Niu’s original composition “Hope”.

Born in 1997, Chinese pianist Niu Niu (Zhang Shengliang) made his recital debut at age 6 and became the youngest student of the Shanghai Conservatory of Music at age 8. He subsequently enrolled at the New England Conservatory of Music and the Julliard School, from which he graduated in 2018. Such a glamorous profile has brought him early success, but does this set him off on a successful career in the long term? The answer may very well be hidden in this album. 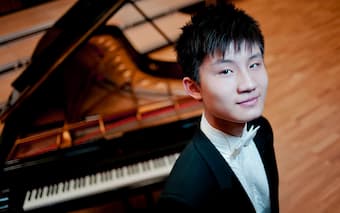 It is commenced by Beethoven/Liszt Symphony No.5 in C minor. The technical challenges in this notoriously difficult transcription are confidently addressed. There is some exceptional imitation of orchestral instruments throughout, while the melodic line is clearly delineated and sensitively shaped. Niu Niu displays impeccable control over the keyboard from the outset, with the capacity to create a wide palette of tonal colours. His astounding technique can be seen in the finale, in which he chooses to play some of the more difficult ossias, adding real excitement to his playing. Triumphant and lively, the finale is highly engaging and imaginative, fully capturing the orchestral sonority and uplifting nature of the music. However, one may look for more of the fatalistic quality in the first movement (which inspires the album title) and more expressiveness in the second movement.

It’s indeed a courageous move to programme the two very well-known sonatas by Beethoven, given that there are already plenty of great recordings available. Beethoven’s Pathétique Sonata is given a colouristic and dramatic reading in the outer movements, together with some careful dynamic shading and innovative voicing. Lyrically characterised and devoid of excessive sentiment, his performance of Adagio cantabile is moving and serene, offering true solace to listeners. 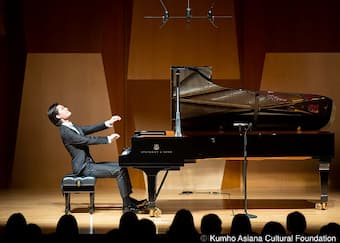 It is followed by an outstanding rendition of Beethoven’s Sonata quasi una fantasia in C-sharp minor (commonly known as the Moonlight sonata). Often over-romanticised by many pianists, the first movement here instead portrays a rather dark, depressing and purposely constrained mood, reminding one of the concepts of death and funeral march. After the carefully voiced, light-hearted Allegretto, here it comes the electrifying Presto agitato, which has an unending forward momentum and sense of urgency. The drama is well captured through obedience to the dynamic markings, controlled tonal changes and use of pedal and a sense of perpetual motion.

The album is concluded with Niu Niu’s Impromptu No. 1, “Hope”. As Niu Niu said in the liner notes, it is a tribute to Beethoven, and he hopes to convey “a certain kind of warmth and generosity” through his work. This rather improvisatory composition has an impassioned climax and some enticing moments. While the ideas may come across as slightly fragmentary, it is nevertheless a nice attempt with genuine emotions from a young, aspiring composer.

Now, back to the question: will Niu Niu enjoy international success in the long run? Niu Niu’s youthful energy and exquisite pianism are clearly evident in this album, but it is far from empty virtuosity. He shows thoughtfulness in both programming and interpretation and I’m confident that with time and devotion, he will further develop his own voice and become a mature and profound artist.

The album is released by Decca Classics on 7 May.