In Tune Arts
Art and Music: Romare Bearden and Music in Collage
by Maureen Buja May 8th, 2021 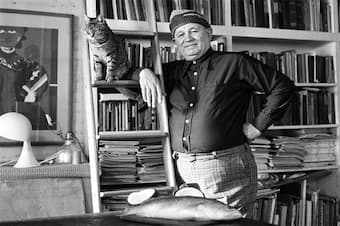 Music has so many aspects in art and we were looking at the collage art of American artist Romare Bearden to see how he captured both sound and sight in his work.

Romare Bearden (1911-1988) was not only an artist but also a composer, writing the song ‘Seabreeze’, which was a 1954 hit for Billy Eckstine. He co-published several songs with Fred Norman and Larry Douglas, but it’s only ‘Seabreeze’ that has stayed in the jazz repertoire.

Born in Charlotte, North Carolina, Bearden was part of the ‘Great Migration’ north in the early 20th century, where many black families moved to New York or Chicago for new economic opportunities and social freedom. He graduated from New York University in 1935. He continued his study of art at the Art Students League with German artists George Grosz and worked as a political cartoonist for the newspapers. 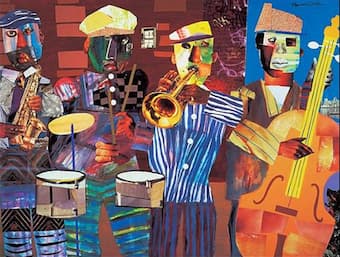 His art was very much a declaration of his life experiences, showing a strong influence of radical artists such as Diego Rivera. After serving in the US Army in WWII, he used the education money of the GI Bill to study art in France at the Sorbonne. While in Europe, he met many of the leading artists of the time, including Pablo Picasso. He was initially successful as an artist but as abstract expressionism took hold, his art was deemed not abstract enough and his New York gallery dropped him.

He began his collage work in the early 1960s, combining paper with images from magazines. He used coloured paper that were then further altered using sandpaper, bleach, pencil or paint.

In his collage Lessons, we have a jazz ensemble of a trumpet and sax player, a bassist, and a percussionist. The trumpet and the sax are from photographs, as are parts of the drums. Some of the features of the players are also from photographs, but the texture of the clothing and the backgrounds comes from Bearden’s choice of colours and designs. 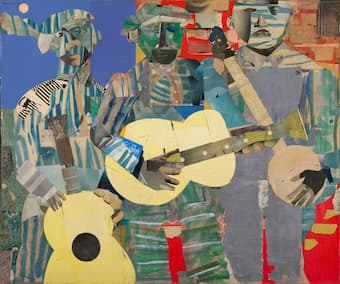 In Three Folk Musicians, the faces and fingers of the musicians come from photographs, but all else is collage creations. He’s created some fanciful designs on the instruments, with one guitar with a mosaic element and the banjo with fine ruffling up the neck. The use of stripes on each players clothing brings forth the question of prison clothing, which was normally black and white striped in the US. In his art, several art traditions get combined, including Cubist collage. 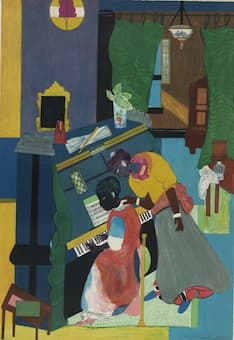 In his 1983 collage dedicated to the jazz pianist Mary Lou Williams, Bearden takes us to a front-room parlour for a music lesson – the music is printed but all the other details are from Bearden’s imagination. Even the piano keys are fanciful, not in the familiar 2 black keys + 3 black keys pattern but even appearing as 4 black keys in one place. There’s a metronome and a vase of flowers on top of the upright piano.

This is just a small example of the number of collages that Bearden created over his career and just of a few of his that use music as the subject. By using such a multi-media way of expression, he permits us to not only see but also hear his works.