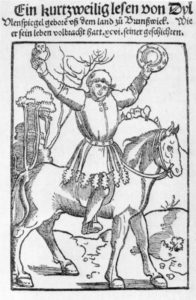 Till Eulenspiegel (1515), depicted with an owl in one hand and a mirror in the other

Who is this rascal Till Owl Mirror? First appearing in a German book published in 1515, he comes straight out of folklore and tales of the practical jokester. In the 1515 book, Till was born near Brunswick around 1300. His travels took him all over the Holy Roman Empire, to the Low Countries, to Bohemia, and to Italy. He is said to have died in Germany of the Black Death in 1350. The 95 chapters of his story tell of his many tricks and practical jokes – many of which are scatological and many of which are designed to show the vices of society.

The young Richard Strauss (1864-1949) took up the tale in his Op. 28 tone poem, completed in 1895. The work opens with what is called a “once upon a time’ theme in the woodwinds. Till is presented in two themes: one, in the horn, is a melody that repeats ever upward before ending on three successively lower notes. Another theme, in the clarinet, represents the trickster sliding through life. 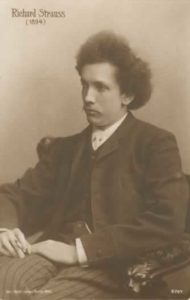 The work presents several of Till’s pranks: upsetting a market as he rides through it on a horse, poking fun at the clergy (in the violas), flirting and chasing girls, and mocking the university faculty (bassoons).

But then it all changes – Till is captured and sentenced to death. The closing minutes of the work have Till attempting to change the mind of the hang man until, with snare drums snarling, he goes to his death. A pause, silence, and then the opening theme comes back in, along with a bit of Till’s own theme in the clarinets before a final full orchestral ending. He is dead only in one world but will live on always in our books and memories. 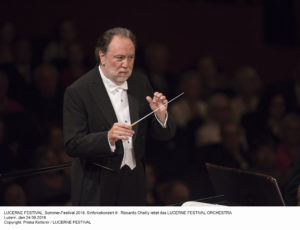 Richard Strauss took the tone poems (symphonic poems) of Liszt and brought them into the late Romantic period. The anti-authoritarian Till Eulenspiegel brings chaos to all levels of society – from the academic to the market women and is the kind of topic that Liszt wouldn’t have approached. The humor is very much in keeping with Strauss’s later works (such the Symphonia Domestica), and the stories of Till’s pranks would have been familiar to Strauss’ audience.