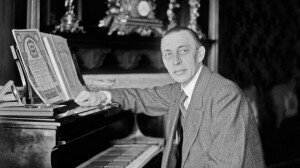 The pieces are intended as “picture studies” (the designation seems to be the composer’s own): evocations in music of visual stimuli, though Rachmaninoff was never specific about what inspired each piece; he preferred to leave such interpretations to listener and performer, suggesting they should “paint for themselves what it most suggests”, rather as Debussy does in his Études, and Préludes (whose titles appeared at the end of the piece in Debussy’s original score). However, he made an exception with five of the Etudes-Tableaux when the Italian composer Ottorino Respighi orchestrated them, and revealed some of the ideas which prompted him to compose them. For example, the E-flat Étude-Tableau (usually published as No. 6 of Op 33), is “a scene at a fair”, and this energetic and uplifting piece certainly suggests the colours, sounds and excitement of a fun fair, albeit with a rather martial beat.

Like the piano Études of Chopin, Liszt and Scriabin, Rachmaninoff used these pieces to explore and exploit a wide variety of themes, textures and sonorities, the possibilities of the modern piano, and how music for it should be written. They are closely related to Chopin’s Études Op. 10 and 25, for they make significant technical demands on the pianist, while also offering characterful, beautiful and varied writing for the instrument. (It is no accident that Rachmaninoff greatly admired Chopin, especially his ability to write exquisite piano miniatures.)

Performing all eight Études-Tableaux together could be considered to run counter to the composer’s original intentions: he published only six in his lifetime. Numbers three and five were published posthumously, though are often inserted amongst the six etudes in modern editions. Number four was transferred to the Opus 39 set. The works make various demands on the pianist: syncopations, alternating hands, changing time signatures, awkward extensions, brisk tempos, expressive melodies, large hand leaps and massive chords. Many require strength, precision, endurance, rhythmic control, and dynamic and tonal balance. They push the boundaries of the Étude even further than Chopin or Liszt did, and are virtuosic in the extreme, with passionate character and vivid rhythmic vitality. While technically and musically challenging, they demonstrate, like much of Rachmaninoff’s other music for piano, his fundamental understanding of the mechanics of the pianist’s hands; but like Chopin, he was not interested in virtuosity for its own sake and these beautifully-crafted miniatures are rich in expression and imagination, structure and harmonic vocabulary, contrasting characters and vivid musical colours.

No. 1 (F minor) begins with a swagger, a purposeful march offset by a brief but haunting lyrical motif. It recalls Chopin’s Etude Op 25, No. 4

No. 1 in F Minor: Allegro non troppo (Rustem Hayroudinoff)
No. 2 (C major) Despite the major key marking, this Etude-Tableau is freighted with poignancy through the use of open fifths and an expressive melody.

No. 3 (C minor) Dark and sorrowful, the dramatic opening gives way to a beautiful songful passage. This Etude-Tableaux was reused in the Largo of Rachmaninoff’s Fourth Piano Concerto (1926).

No. 3 in C Minor: Grave (Rustem Hayroudinoff)
No. 4 (D minor) Originally No. 5 and published posthumously, this is a folksy kopak with complex harmonies and textures.

No. 5 (E-flat minor) Considered the most difficult to play of the Op 33, with a constant running figure in the right hand, and many octave leaps and chromatic scales.

No. 5 in E-Flat Minor: Non allegro – Presto (Rustem Hayroudinoff)
No. 6 (E-flat major) Exuberant and martial, this study ends with a particularly virtuosic coda with big, semiquaver chords in the right hand and a fortissimo octave figure in the left hand.

No. 7 in G Minor: Moderato (Rustem Hayroudinoff)
No. 8 (C-sharp minor) An almost Lisztian declamation with rich orchestral textures and dramatic interplay between the piano’s registers, this Etude was one of the three of the Op. 33 famously recorded by Sviatoslav Richter at the Melodiya Studios.