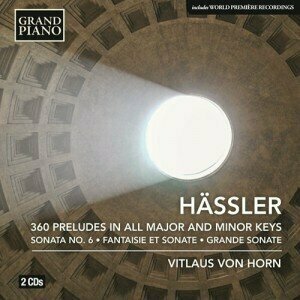 Johann Wilhelm Hässler is remembered by musicologists for his contest in organ playing with Mozart, but the mostly première recordings show him to be an astonishing enigma whose predilection for composing miniatures reached a pinnacle with the 360 Preludes in All Keys. This remarkable tour de force shows an amazing control of textures and not insignificant humour, its style ranging from CPE Bach’s Empfindsamkeit to prophetic insights anticipating Schumann. The Grande Sonate is a true masterpiece that compares in scope, invention and effect with the best of Haydn’s sonatas.