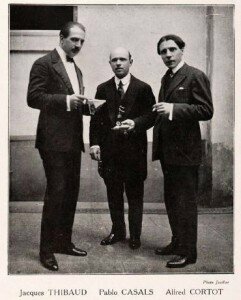 The idea of a trio is simple. Three people, three performers, and so on. But the musical trio is something special. We’ll start with the piano trio. At first piano trios were groups that got together and then just as quickly disbanded. In 1906, however, one of the first ‘name’ trios got together, consisting of pianist Alfred Cortot, violinist Jacques Thibaud, and Pablo Casals on cello. The ‘Cortot-Thibaud-Casals Trio’ made everyone reconsider the old truism that soloists make terrible ensemble players. 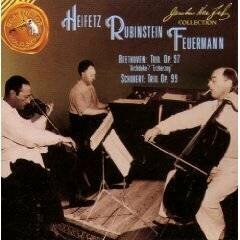 The individual strengths of each player opened a new eye onto a repertoire that had largely been consigned to amateur performances at home: the Piano Trio. Beethoven had written 12 of these and took great care that each voice had a distinctive role. The piano is more than just accompaniment and the cello does more than playing the bass line.

Beethoven: Piano Trio No. 7 in B-Flat Major, Op. 97, “Archduke”: I. Allegro moderato (Alfred Cortot, piano; Jacques Thibaud, violin; Pablo Casals, cello)
The first so-called Million-Dollar Trio of Arthur Rubinstein (piano), Jascha Heifetz (violin), and Emanuel Feuermann (cello), formed in 1941, and a later one, with the same nickname, was made up of Arthur Rubinstein (piano), Jascha Heifetz (violin), and Gregor Piatigorsky. The name came from the fact that the three players (no matter what combination) were the most famous soloists of their day. Feuermann so hated the nickname that he exited the trio very quickly after it was applied. The first trio played trios of Beethoven, Schubert and Brahms, while the second trio played more works by modern composers such as Mendelssohn, Tchaikovsky, and Ravel. 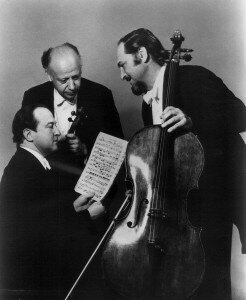 The Beaux Arts Trio had their start in 1955 at Tanglewood, or as it was known then, the Berkshire Music Festival. Their final concert was held over 50 years later in 2008. The original members were Menahem Pressler on piano, Daniel Guilet on violin from 1955 to 1968, and Bernard Greenhouse on cello from 1955-1987. Although new members took over on strings, Menahem Pressler remained the sole pianist.

Beethoven: Piano Trio No. 7 in B-Flat Major, Op. 97, “Archduke”: III. Andante cantabile ma pero con moto (Beaux Arts Trio)
The Beaux Arts Trio was able to record the entirety of the Piano Trio repertoire and on what would have been their 60th anniversary in 2015, Decca Classics issued a 60-CD box set of their recordings.

Eugene Istomin (piano), Isaac Stern (violin), and Leonard Rose (cello) formed the Istomin-Stern-Rose Trio in 1961. They also focused on the music of Beethoven, Brahms, and Schubert and their Beethoven recording won a Grammy Award in 1960. 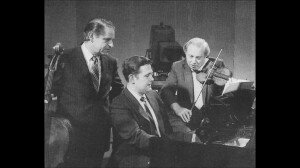 The Ax-Kim-Ma Trio formed in 1983, consisting of Young Uck Kim on violin, Yo-Yo Ma on cello, and Emanuel Ax on piano. While Ma and Ax knew each other from Juilliard, Kim studied at the Curtis Institute in Philadelphia. Their 1988 recording of Dvořák’s trios was an award-winner.

Dvořák: Piano Trio No. 3 in F Minor, Op. 65: I. Allegro ma non troppo (Young Uck Kim, violin; Yo-Yo Ma, cello; Emanuel Ax, piano)
Other famous trios have gotten together, such as Daniel Barenboim, Pinchas Zukerman, and Jacqueline du Pré; Wilhelm Kempff, Henryk Szeryng, and Pierre Fournier; Vladimir Ashkenazy, Itzhak Perlman, and Lynn Harrell to list just a few of the more familiar ones. The individual artists, when combined together with music that is designed to show their strengths, have created ensembles that transcend each members’ personal fame to give us a new reason for that fame.