Features
Clarinet Trios – The Voice of the Wind
by Maureen Buja April 27th, 2018 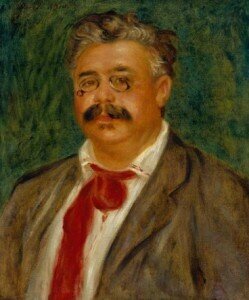 The clarinet as an instrument was born in the ancient past but came into its own at the time of Mozart. With the assistance of two virtuoso brothers, Anton and Johann Stadler, the clarinet took its place first in chamber ensembles and then in the orchestra. Its flexible sound, used in both classical and popular music, its extensive range, and the range of tones it can produce has intrigued composers for centuries.

In 1786, Mozart wrote his Kegelstatt Trio and performed it at a friend’s house with Anton Stadler on clarinet, himself on viola, and his student Franziska von Jacquin on piano.

Mozart: Piano Trio No. 2 in E-Flat Major, K. 498, “Kegelstatt”: I. Andante (Richard Stoltzman, clarinet, Yo-Yo Ma, cello; Emanuel Ax, piano)
This was really the first serious clarinet trio. The genre would be taken up by composers such as Beethoven and Brahms, and in modern times by Milhaud and Bartók.

Beethoven’s Gassenhauer trio takes a more authoritative approach to the clarinet – in the final movement, a set of variations on a melody from an opera by Joseph Weigl. The song, “Pria ch’io l’impregno” (Before I Go to Work) had become so popular that people in the street sang it, hence the “Gassenhauer” nickname for the work – it was a simple melody that the people in the street (Gasse) had taken it up.

Beethoven: Trio in B-Flat Major, Op. 11, “Gassenhauer”: III. Thema: Pria ch’io l’impegno (Allegretto) mit Variationen (Nash Trio)
Johannes Brahms only wrote five trios, and only one for the clarinet. His Op. 114 trio for Clarinet, Cello, and Piano was written for the clarinettist Wilhelm Mühlfeld, for whom Brahms also wrote his Clarinet Quintet, Op. 115. Brahms liked Mühlfeld’s playing so much that he also wrote two Clarinet Sonatas, Op. 120, for him, and when they took the clarinet works on tour, gave all performing right fees during his lifetime, all fees from their joint performances, and the manuscripts of both sonatas after publication. 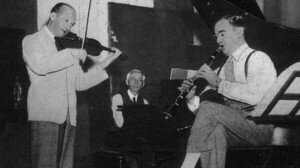 Brahms: Trio for Piano, Clarinet and Cello in A Minor, Op. 114: I. Allegro (József Balogh, clarinet; Jenő Jandó, piano; Csaba Onczay, cello)
Béla Bartók’s Contrasts, for clarinet, violin, and piano, was written at the request of violinists Joseph Szigeti, but was actually commissioned by the jazz clarinettist Benny Goodman. Its premiere at Carnegie Hall in 1940 had all three artists performing.

Bartók: Contrasts (Benny Goodman, clarinet; Jozsef Szigeti, violin, Béla Bartók, piano)
This commission was part of Goodman’s exploration of the classical repertoire – and he gave the premieres of works by Malcolm Arnold, Morton Gould, Francis Poulenc and Leonard Bernstein. He also made a recording of Stravinsky’s Ebony Concerto, for solo clarinet and jazz ensemble.

Nina Rota’s Clarinet Trio for clarinet, cello, and piano, was written in 1973 has a lyrical second movement, almost a duet between cello and piano with the piano providing a rich background for the voices. It’s the third movement, however, that carries us to the light and action of Rota’s film music.

Rota: Trio for Clarinet, Cello, and Piano:III. Allegrissimo (Goran Gojevic, clarinet; Winona Zelenka, cello; Mary Kenedi, piano)
Many other composers wrote for clarinet trio: Vincent d’Indy, John Ireland, Arnold Bax, Gabriel Fauré, Alexander Zemlinsky, Karl-Birger Blomdahl, to mention just a few. For an instrument that made its appearance on the classical music stage fairly late, the clarinet has made a lasting impression on the classical repertoire.