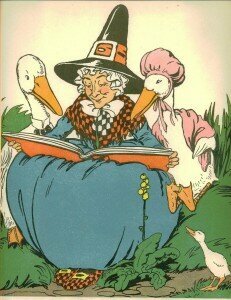 Maurice Ravel (1875-1937) loved children. Although he was not married and did not have children of his own, he always seemed to spend more time with children than with adults. In fact, he never outgrew his ability to see the world through children’s eyes. A famous anecdote relates that during a very long and boring meeting, Ravel had suddenly disappeared. Everybody was probably worried, and they began to search the building from the top floor to the basement. Finally he was found in the children’s playground, sitting on the swing and playing with woodblocks. So it shouldn’t come as a surprise that Ravel also wrote music about and for children. No doubt, his most famous children’s work is Ma mère l’Oye (Mother Goose).

Ravel was a frequent guest at the salons of Cyprian and Ida Godebski, a young Polish couple whose Paris apartment became the gathering place for some of the greatest artists of the day. The Godebski’s had two highly talented musical children, Mimi and Jean, ages 6 and 7. Since the children loved fairy tales, Ravel would often make up stories, and he even sent them funny postcards from his travels. When he saw them reading an illustrated version of French fairy tales, he decided to compose the Mother Goose Suite for piano 4 hands. Ravel recalled, “The idea of evoking the poetry of childhood in these pieces naturally led me to simplify my style and to refine my means of expression.” 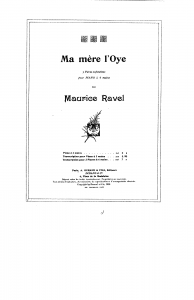 Dedicated to Mimie and Jean, both accomplished pianists at an early age, Ravel hoped that the children would perform the premiere. They declined, and two more precocious children, Geneviève Durony and Jeanne Leleu, ages 6 and 7, premiered the work on 20 April 1910. Ravel was over the moon, and wrote to Jeanne, “When you are a great virtuosa and I either an old fogey, covered with honors, or else completely forgotten, you will perhaps have pleasant memories of having given an artist the very rare joy of hearing a work of his, one of a rather special nature, interpreted exactly as it should be.”