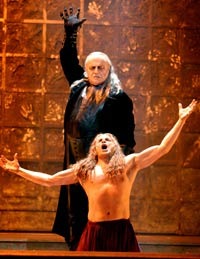 Dying is an essential part of just about every opera plot. Whether husbands or male lovers act out of jealousy, or wives or female lovers go mad, opera has given us a delectable variety of violent and unnatural deaths. Yet the distinctive difference between actual and theatrical murder is the fact that the victim is likely to live long enough to sing an aria before expiring gracefully. And it has always spurred the musical imagination of operatic composers to encapsulate these moments of final demise. So, let us sample some violent but melodious deaths on the operatic stage. For a good number of librettists and composers, death by stabbing was an all-time favorite. As far as stabbing goes, it always provides the opportunity for either the murderer or the victim to stagger about the stage. In the case of Verdi’s Rigoletto, the assassin Sparafucile stabs the heroine Gilda. Despite being stuffed into an old sack, Gilda survives long enough to sing a sad farewell to her father Rigoletto.

Giuseppe Verdi: Rigoletto, “V’ho ingannato” (Father, I deceived you)
Knives and other sharp implements are not merely used to inflict harm on others. A substantial number of operatic characters turn theses weapons upon themselves. Yet, simple suicide by stabbing was clearly not gruesome and authentic enough for Cio-Cio-San in Madama Butterfly by Giacomo Puccini. The heroine has agreed to give up her child to Pinkerton and his new American wife, Kate. Butterfly prays to the statues of her ancestral god, before saying goodbye to her son. She blindfolds the young boy and places a small American flag in his hands. Being set in Japan, and all, she walks behind the screen and cuts her throat with her father’s hara-kiri knife. The knife falls to the floor and Butterfly staggers from behind the screen with a scarf around her neck. She kisses her child and collapses. Emotionally slightly over the top, it is nevertheless one of the most powerful scenes in all of operatic history.

Giacomo Puccini: Madama Butterfly, “Con onor muore” (To die with honor)
Operatic suicide by sharp implement can be a rather messy affair. Slightly gentler, but by no means less deadly, is botanical suicide. At least that’s what the librettists Edmond Gondinet and Philippe Gille had in mind when they adopted Lakmé for musical treatment by Léo Delibes. Set in British India during the late 19th century, Hindus were forced to practice their religion in secret. When the priestess Lakmé and her servant Mallika gather flowers by the riverbank they stumble upon two British officers Gérald and Frederic. As it frequently happens in opera, Lakmé and Gérald fall in love, with Lakmé’s mother Nilakantha vowing revenge for the dishonoring of her daughter. At a night bazaar, Nilakantha stabs Gérald—there is that nasty knife again—but Lakmé takes her lover to a secret hideout and nurses him back to health. When Gérald nevertheless abandons her, she dies in honor by ingesting the leaves of the poisonous Datura plant. Typically, ingestion of this poisonous plant causes a violent and rather seriously unpleasant death, yet in the operatic world, Lakmé expires gracefully.

Léo Delibes: Lakmé,“C’est lui! C’est lui!” (It’s him, It’s him)
Things can get pretty hair-raising on the operatic stage when supernatural forces are pitted against human protagonists. Probably the most famous work in this category is Don Giovanni with music by Wolfgang Amadeus Mozart. An ominous knocking at the door announces the statue of the Commendatore. He offers Giovanni a last chance to repent, however, the old philanderer steadfastly refuses. Eventually, the statue disappears as a horde of demons carries Giovanni down to Hell. Probably not the easiest way to pass into the eternal beyond, but terrifyingly dramatic nevertheless. Specifically when it is all set to the music of Mozart!