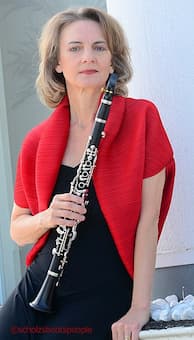 Critics have written, “Few clarinetists today show such technical perfection as Sabine Meyer.” In fact, she has quietly achieved superstardom “through a combination of effortless but unmistakable accomplishment, well-honed technical skills, a varied palette of sound and an irresistible musicality. She has performed as a soloist and chamber musician throughout the world, earned critical acclaim for her recording catalog, and is a noted educator.” Meyer, born on 30 March 1959 in Crailsheim, Germany, hails from a true clarinet family. Her grandfather, father and older brother were already playing the clarinet and, for her, it was without doubt the right choice as well. “I started to play the piano early on, after a while the violin too, I only took up the clarinet later and the organ as well. For years I practiced all four instruments and enjoyed it. However, I soon realised that the clarinet suited me best. The modulation of the sound, playing with your breath – right from the start I had the feeling: that’s my instrument!” 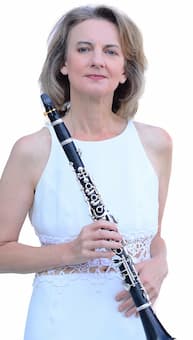 Meyer made her professional debut at the age of 16, and she joined the Bavarian Radio Symphony Orchestra in Munich. She soon attracted the attention of Germany’s most famous orchestra, and music director Herbert von Karajan asked her to join the Berlin Philharmonic in 1982. Karajan’s decision to appoint her solo clarinet made waves in the orchestra, as it had a tradition of not admitting female musicians. In fact, Meyer was only the second female player to join that prestigious orchestra at that time. However, the honeymoon did not last very long. Following her probationary period with the orchestra, her fellow orchestra musicians voted 73 to 4 that she should leave, suggesting, “that her sound didn’t blend in with the section.” Music director Herbert von Karajan and other observers strongly suspected the reason was her gender, and they fought for her to stay.

“As a member of the Berlin Philharmonic,” Meyer explains, “you are lucky to meet many important music personalities; this can be international soloists, but also famous conductors. It fundamentally shapes your own musical development. Besides Karajan, these were, for me, Rafael Kubelík, Leonard Bernstein and Carlo Maria Giulini, to name a few.” 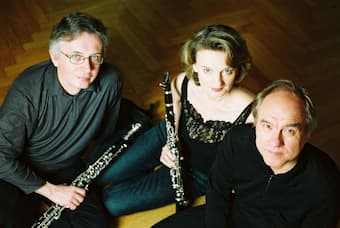 As Meyer explained in an interview, “from an artistic point of view, there’s no better job for a clarinettist than to play with such an orchestra. My decision to leave was therefore not easy, and due to unfortunate circumstances.” Meyer played with Berlin for nine months and resigned before the conclusion of her probation period in 1983 to focus on her solo and chamber career. For a wind player, a “solo career is neither desirable nor practically possible,” she explained, “because the wind repertoire is not big enough to sustain one successfully for a number of years.” As such, “Meyer spends a good deal of time in chamber music performances and also teaches at the Lübeck Conservatory. Chamber music is of paramount importance to Meyer, and together with her husband and brother she founded the “Trio di Clarone” playing repertoire that ranges from Mozart to Jazz. Meyer wrote, “We performed with this trio for a surprising number of years in a variety of projects, initially combining original works by Mozart with contemporary music.” As programmes developed, they collaborated with jazz clarinettist and composer Michael Riessler and Pierre Charial playing the hurdy-gurdy in a project titled “Paris Mécanique, which tells a story of Paris in the twenties, the advent of film music and automated music.”

Meyer calls herself “critical towards contemporary music. On the one hand, there’s a lot of ballyhoo or ingratiation toward the audience, on the other hand there are many compositions that a normal musician can no longer play. Regardless, there are valuable and distinguished composers and many works, which were written for me, that will last. For example works by Hosokawa, Eötvös, Denisov, Françaix, Trojahn, Reimann, Illés and many more.” Meyer is always on the lookout for new interesting pieces to learn, but “first you always have to analyze the text. Furthermore, you have to understand the composer’s intentions; that’s what it’s all about. As instrumentalists, we are only the intermediary between the composer and the audience.” When she was asked about the core repertoire for her instrument, she immediately names Weber, Hindemith, Nielsen, and Stamitz. However, according to Meyer, the Mozart Clarinet Concerto is at the core of the clarinet repertoire. “It is the best composition ever written for a wind instrument. Everything else pales in insignificance beside it… It is incredibly deep and rich of expression, colour and compositorial ideas,” and she always plays the concerto on a basset clarinet. “The work was composed for a basset clarinet,” she explains “and although it can be played on a flute, viola or normal A clarinet, none of these adaptations have the astounding range of the basset clarinet.”