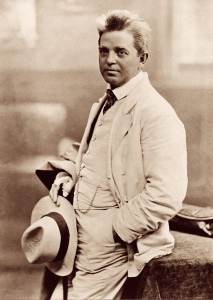 Over the last 150 years, the Nordic countries have produced two important composers. Both were born in 1865, however, Denmark’s foremost composer Carl Nielsen was never able to match the popularity of his contemporary Jean Sibelius. Sibelius hailed from an upper middle-class home within commuting distance to Helsinki, while Nielsen was the seventh of twelve children of subsistence peasants living on the remote island of Funen. While Sibelius was inspired by the usual academic, nationalist and philosophical systems, Nielsen’s music takes its bearing almost exclusively from the sounds and the contemplation of the countryside. When Nielsen studied at the Copenhagen Conservatory, he did not study composition. As a result, his development from the late style of Johannes Brahms to the modernism of the 20th-century was distinctly individualistic.

Carl Nielsen: 5 Piano Pieces, Op. 3
As a boy, Nielsen received instruction on the cornet and trombone. He demonstrates such early proficiency that he was hired as a military trumpeter at age 14. Some of his earliest compositions were dance pieces for the military band, and in his six symphonies of his maturity, Nielsen took special care with the scoring for the wind and brass instruments. The inspiration to compose a wind quintet arose after overhearing a rehearsal by the Copenhagen Wind Quintet in 1921. The composer provided a short description of the work, “…to present the characteristics of various instruments. Now they seem to interrupt one another and now they sound alone. The theme for the variations is a spiritual song, which is made the basis of a number of variations, now gay and grotesque, now elegiac and solemn, ending with the theme itself, simply and gently expressed.” Combining both modern and neo-classical elements and emphasizing the distinct tone characteristics of different wind instruments, the Wind Quintet has become one of Nielsen’s most popular pieces.

Carl Nielsen: Wind Quintet, Op. 43
The Wind Quintet is scored for flute, oboe, clarinet, horn, and bassoon. Nielsen planned to write a concerto for each of the five instruments. Unfortunately, prior to his death in 1931, he was only able to complete one concerto for flute and one for clarinet. Nielsen wrote the Clarinet Concerto during the most difficult period of his life. Disappointed that his music had not reached a wider audience, Nielsen was also diagnosed with a serious heart condition. Juxtaposing the tonalities of F major and E major, the concerto seemingly mirrors Nielsen’s personal struggles. “The clarinet at one and the same time can seem utterly hysterical, gentle as balsam and screeching like a tramcar on badly greased rails,” Nielsen declared. A critic suggested that Nielsen had “liberated the soul of the clarinet, not only the wild animal aspect but also its special brand of ruthless poetry.” Premiered in 1928, the Clarinet Concert was Nielsen’s final major orchestral work.

Carl Nielsen: Clarinet Concerto, Op. 57
Sibelius and Nielsen personally met during a study year in Berlin. Recognizing each other’s talents, they struck up a diplomatic friendship. While Sibelius was celebrated as a national hero at home, Nielsen worked as an opera conductor in Copenhagen. Nielsen was 27 when he wrote his first symphonic essay, recognizing that tonality was on the verge of exhaustion and in desperate need of reconfiguration. While avoiding dissonance, Nielsen experimented with evolving tonality, and his third “Sinfonia Espansiva” mirrors Mahler’s preoccupation with ecological issues. Highly pastoral in character, the work nevertheless is full of ominous grumblings as the countryside is being ravaged by industrial progress. In his notes, Nielsen wrote, “The symphony expresses—in the first movement—a strong tension which in the second movement, however, has been completely eradicated by idyllic calm. Towards the end of this movement two human voices sing on the vowel “a” as though to bring about a sort of phlegmatic paradise mood and the healthy enjoyment of everyday life.”