Shortly before his 55th birthday, Léo Delibes collapsed and died at his home in Paris. He was buried in the Cimetière de Montmartre in Paris, and his legacy was secured with the ballet Coppélia and his operatic masterpiece Lakmé. 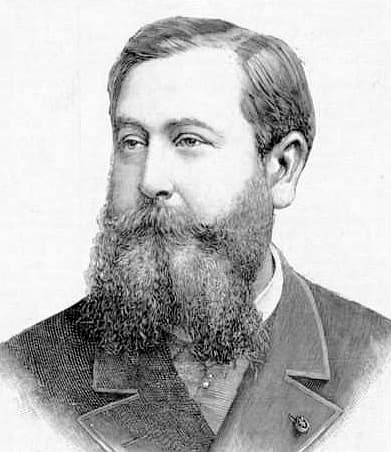 The German philosopher Friedrich Nietzsche once snidely remarked that he liked the music of Delibes because “the composer made no pretensions to depth.” To be sure, his early music is frequently described as possessing “wit, charm, elegance, grace, color, and lightness,” and as an operetta composer, he excelled at character numbers. However, Lakmé offers more than just a fine vehicle for a star soprano, as “the two principal male characters, Nilakantha and Gérald, are firmly drawn, and the music is melodic, picturesque and theatrically strong.” Delibes made use of the popular orientalizing style then fashionable in Paris, and the exoticism of the opera’s setting and the elegance of his melodies, has made it a lasting favorite with singers and audiences alike. In fact, the “Flower Duet” in Act 1, between Lakmé and her servant Mallika, is one of the most popular of all duets for soprano and mezzo. 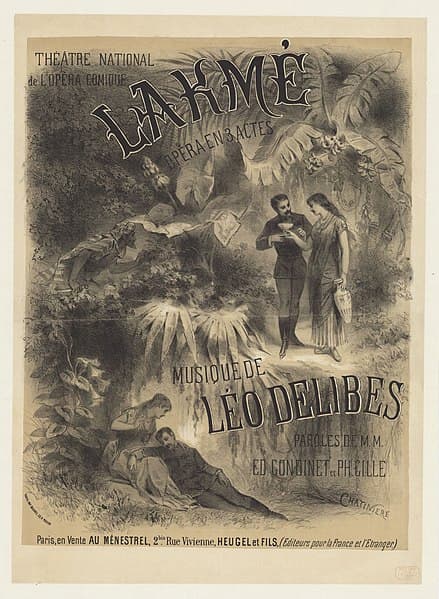 Poster for the premiere of Lakmé

Before his untimely death, Delibes was working on an Opéra in 4 Acts and 5 Scenes titled Kassya. It is based on a short story by Leopold von Sacher-Masoch, who inspired the term “masochism” coined by the psychiatrist Richard Freiherr von Krafft-Ebing. “I feel justified,” the psychiatrist writes, “in calling his sexual anomaly “Masochism,” because the author Sacher-Masoch frequently made this perversion, which up to his time was quite unknown to the scientific world, the substratum of his writing.” This assessment is based on Masoch’s best-know story Venus in Furs, published in 1870. It details Masoch’s fantasies and fetishes, especially for dominant women wearing fur, and we know that Masoch did his best to live out his fantasies with his mistresses and wives. In the event, Masoch also wrote on folklore and culture of his homeland, Galicia, and Kassya has everything you always wanted to see on the operatic stage: Class war in Eastern Europe; a proletariat hero; a peasants’ revolution; the nobility banished; the violent death of a woman seduced by luxury; and happiness in a humble cottage.

Delibes had traveled to the Carpathian Mountains in the summer of 1885 in the company of the explorer Ferdinand de Lesseps to study the culture and music of the region. Even at that time, the area was still suffering from the aftereffects of the Galician peasant uprising of 1846. This revolt against serfdom was directed against manorial property and oppression, and nearly 1,000 nobles were killed and 500 manors destroyed. 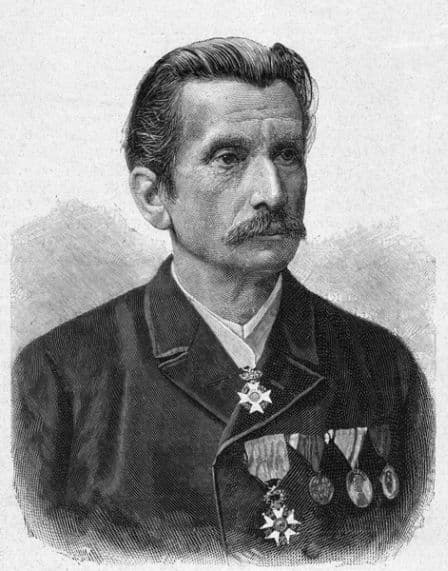 Georges Street, grandson of Metternich’s master spy, Georg Klindworth, and the son of Agnes Street-Klindworth wrote, “But, in this hell of a land Galicia, it’s never quiet, and one must always fear for tomorrow.” The Galician peasant uprising served as the backdrop for Delibes’ opera, and it was announced for the 1887/88 season of the Opéra-Comique. However, a fire at the salle Favart preempted any attempts to put the work on stage. Also, at that time, Delibes had not yet finished the score, and when he died in 1891, the opera was unfinished. He had fully composed the piano/vocal score, but only orchestrated the first act. 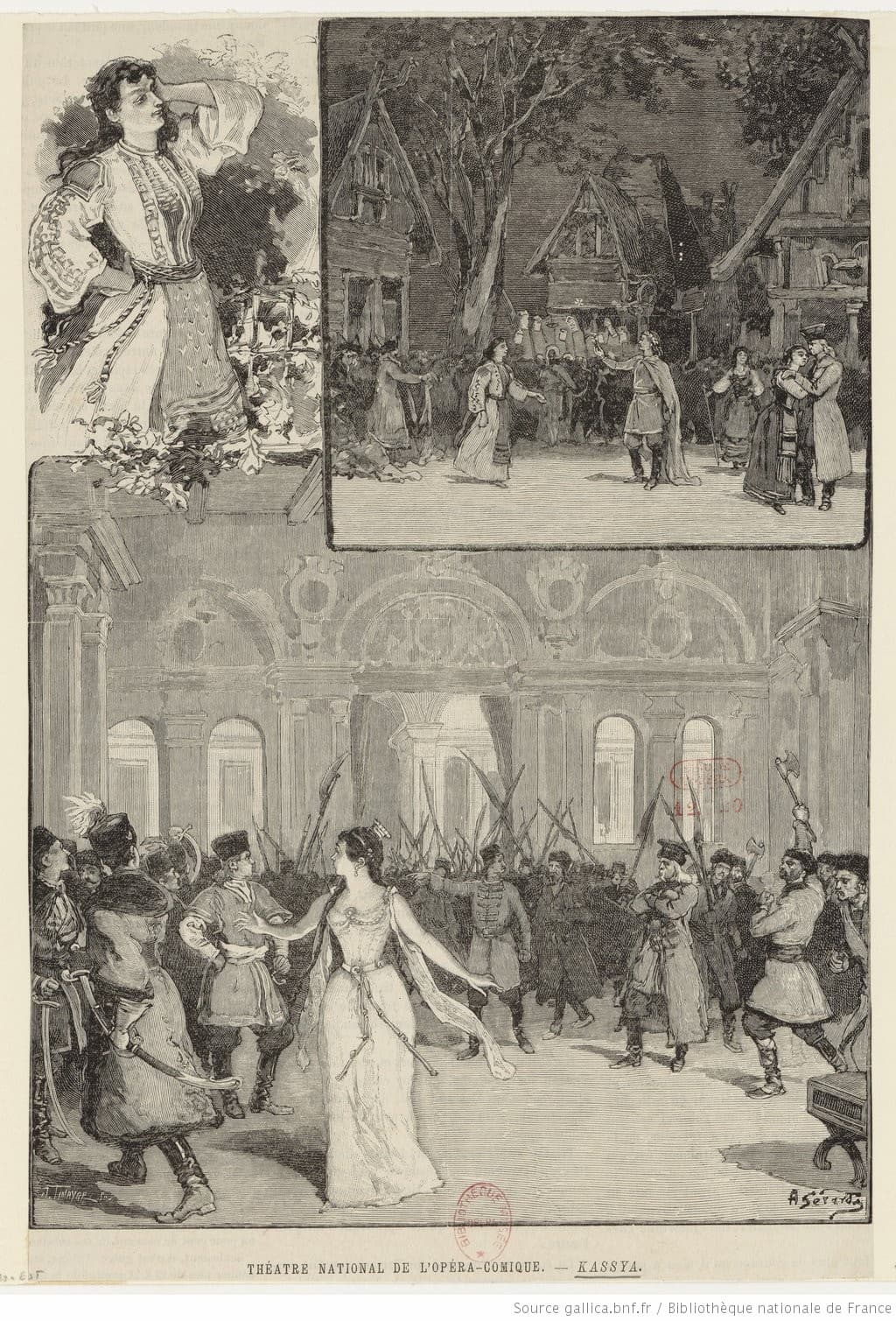 It was left to his colleague Jules Massenet, who had accompanied Delibes on his earlier trip to Galicia, to complete the work. Massenet furnished the orchestration and turned the spoken dialogues into sung recitatives. The story takes place in a little Galician village around Christmas, and the young peasant Cyrille loves the gypsy girl Kassya, but he is loved in turn by the peasant Sonia. The Count also loves Kassya and tries to seduce her, and when she resists, offers to marry her. When Cyrill hears of the marriage proposal, he threatens Kassya with a hammer, but is calmed when she tells him she loves him. The Count forces Cyrille to join the army and Kassya into marriage. Two years later, the peasants, led by Cyrille, revolt against the Count and his new Countess Kassya. The Count and his aristocratic friends are unaware that the revolt is coming and celebrate in the castle. The peasants storm in, but Cyrille stops them from killing the Count and Countess, who are banished. It is decided that Cyrille will marry Sonia, but Kassya pleads with him to love her. When she is rejected, she stabs herself. The opera was first performed at the Théâtre National de l’Opéra-Comique (salle du Châtelet), Paris, 24 March 1893. A critic wrote, “the work was colorful and picturesque, but the character was rather somber, the tone rather violent, and the story not interesting enough.” It ran for only eight performances and was subsequently not heard for 115 years.