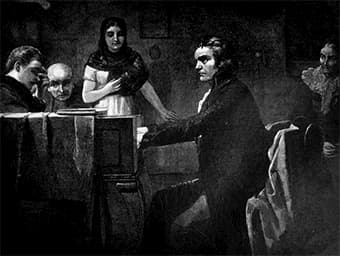 Unlike others, I often find it difficult to recall my first encounter with a certain composer. So, for Beethoven, it could have been his Für Elise, Symphony No.5 (ta-ta-ta duh) or something else – I don’t know. But anyways, as an amateur pianist (at best), I’ve fallen in love with his piano sonatas since I was a child. Hailed as “The New Testament” of the piano literature by Hans von Bülow, they each encapsulate a unique story and reveal Beethoven’s development, both as a musician and a human being, as we journey from Op.2 to Op.111.

With a virtuosic and concerto-like opening, Sonata in C major, Op.2 No.3 contains youthful exuberance and sense of humour. The slow movement, however, asks for stark dynamic contrasts with some ground-shaking sforzandi and the softest pianissmi possible. An intense struggle between life and death is conveyed – it’s rather staggering to realise this theme appeared early in his compositions. As one of his earliest sonatas, it shows some influence from his predecessors, such as Haydn and Mozart, but meanwhile it is evident that Beethoven’s personal voice was already emerging, for such a direct expression of raw emotions had never (or seldom) been found in music before him.


Another favourite of mine is the Sonata in C-sharp minor “Quasi una fantasia”, Op.27 No.2, which is (unfortunately) more commonly known as the Moonlight Sonata. (Bear in mind that Moonlight is just a nickname and wasn’t prescribed by Beethoven himself!) Although this sonata is over-played almost to the extent of being a cliché, Afanassiev’s unconventional interpretation presented a totally different conception of this work, with the first movement creating an imagery of death knells. The agitating final movement is undoubtedly great fun to play – I was addicted to it for quite some time!

One may find it tempting to attach different labels to composers, like Beethoven as a heroic figure or Chopin as the poet of the piano. Yet, I believe musicians, just like any one of us, are multi-faceted – Beethoven’s Sonata in E minor, Op. 90 is a solid proof. Contrary to most of his other sonatas, it is more like an intimate, serene conversation and displays the introverted side of Beethoven. What a heart-warming theme in the second movement and string quartet-like ending!

You may wonder where the late piano sonatas are. The reason they aren’t included is simply that I feel I don’t have the maturity to fully appreciate them at this stage – they are so complex in terms of their emotional landscape, harmonic language and forms! That being said, the sense of victory in the face of adversity in Op.110 and ethereality in Op.111 have always made it an otherworldly experience to listen to them live.