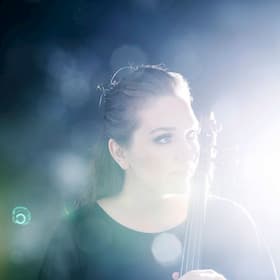 December’s Artist of the Month is Icelandic-American cellist Sæunn Thorsteinsdóttir. Currently based in Seattle, she has appeared as a soloist with orchestras including the Los Angeles Philharmonic, BBC Symphony Orchestra and NDR Elbphilharmonie Orchester. Sæunn also teaches cello at the University of Washington and has a passion for the new, collaborating frequently with other artists in both the USA and Iceland.

I catch up with Sæunn following a recent concert, her first (thanks to the pandemic) in a long time. For Sæunn, it ‘felt like it was more of a concert than normal. I don’t know how to describe it, but it felt more real than a lot of things I’ve been doing. It’s interesting how our perspective has completely changed these days. It was really wonderful,’ she says.

I ask Sæunn if she feels like she is making music in a new way since the enforced hiatus. ‘To me it’s more like a heightened awareness or focus,’ she explains. ‘It seems like for me at least, the pandemic has been such a time to boil things down to their basic elements, to get the chance to explore that in a concert, to get to the heart of the music and [think] how I can efficiently and openly share this music through my instrument.’

Our conversation quickly turns outwards, to the state of music and musicians in general: ‘I also [think] ‘why do people come to concerts?’ ‘Why do they want to tune in?’ ‘What’s the driving force behind it all?’ asks Sæunn. ‘[The pandemic] just clarifies things. In the past we didn’t have time to think about those things, or at least we weren’t forced to. For me it makes it that much more important and meaningful.’ 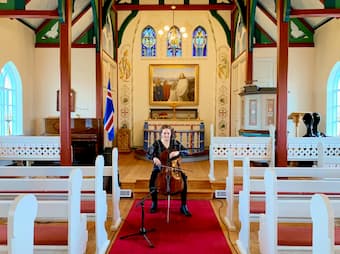 ‘I hope this gives us a more clarified vision for what music can be in our society and why we do it, and how we can really serve people, really give people what they need and want,’ she says. ‘We’ve been going along with sort of an antiquated system for such a long time and I think it’s time we think about what we really want, what is it that we can do with the circumstances we have, and hopefully that kind of thinking won’t just go back once things are lifted and we have vaccines. I hope that we continue to think that way.’

As the pandemic hit, Sæunn was preparing for a series of concerts of the Bach Cello Suites in Iceland, a series that was still able to go ahead despite other international lockdowns, thanks to Iceland’s handling of the outbreak.

‘I was just lucky that I was preparing for a solo show,’ Sæunn recalls. ‘It really kept me going for those first few months. I don’t know what I would’ve done without it.’

The series featured six concerts in one day, spread over six different churches in the Westfjords of Iceland, over the summer solstice on 20 June. The final concert at 11pm faced out into the midnight sun over the Atlantic Ocean, and in Sæunn’s words, ‘the sixth suite is the sunniest of them all, it was magical. I was so glad it could actually happen.’

Sæunn moved to the USA from Iceland when she was 7, ‘but I’ve been back and forth ever since. The past ten years or so I’ve been much more involved in the new music scene there, and it’s been really amazing to rediscover Iceland as an adult. It always feels like home to go there. I studied music and the cello seriously in the States, so that was ‘the States’, and then Iceland was home. Rediscovering it through music and connecting with musicians in Iceland has been one of the greatest joys.’

Speaking of her connection to Iceland, Sæunn mentions ‘I definitely feel like my life is richer because of it. I tend to see things less black and white, less binary, and the thing about Iceland, about coming from such a small place, I’ve noticed that people really have this feeling of ‘I better do it because no-one else will’, and it’s up to each person to make their own life and their own impact, whatever they want to do. I’m very thankful for that attitude.

‘Of course, [Iceland] is a very creative place and very open musically. Places like [the record label] Bedroom Community have been incredible.’ 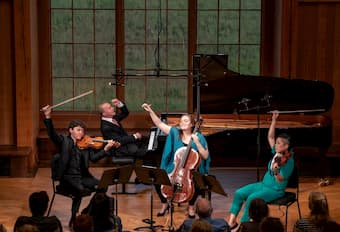 Sæunn is in her fifth year on the faculty of the University of Washington, where she has a studio of cello students in addition to undertaking her own research, currently focusing on improvisation. ‘I’m really excited about it’, she says. ‘As classical musicians we don’t do it as much. It kind of has this air of ‘oh, it’s improv, you just do what you want,’ and it’s like meditation: if you think meditation is just sitting there with your eyes closed…’

Sæunn is delving into the relationship musicians can have between themselves, their instruments, and the often-rigid structures they encounter in their practice.

‘I realise how much space there is for interpretation and spontaneity in other things, in very ‘formal’ written-down music, that there is quite a lot that cannot be put on the sheet music, on the page, that how much is up to us as interpreters and performers to take responsibility for that and not to just say ‘I’ll play my best.’ What can you bring that no-one else can?’ she asks.

‘I think for me, what’s been so interesting is that I find it so much easier to improvise with others than having to be by myself and improvise by myself… it’s so much easier for someone else to question and observe and pinpoint and draw conclusions. It’s so hard to see ourselves as we really are without judgement and to just observe.’

Sæunn wants to investigate what preconceived notions musicians might bring with them to the table, and not necessarily just when improvising. She speaks of ‘what we call ‘enabling constraints’ – guiding the flow so that it becomes something, but what I’m realising is that there are so many constraints that we make for ourselves […] we come at things with our own constraints, with our own perspective, and [I want to] choose those constraints.

‘The library of music we have in our bodies from playing all the music that we play, and dedicating all this time to this art form, that’s really the library of sounds that we’re pulling from. Knowing that that is there, that it’s in us and a part of us, not just our mind but our body too, and how to make and connect those sounds – it’s just fascinating.’