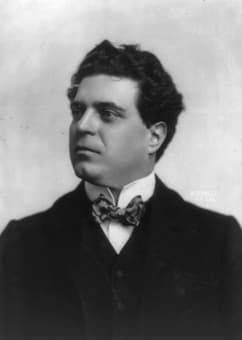 In 1921, Italian composer Pietro Mascagni (1863-1945), having finished his latest verismo opera, Il piccolo Marat, he shut himself away to fight the modernism that seemed to be taking over opera. He stopped writing almost entirely for the next 24 years, except for 3 works: a revival of a dramatic idyll, Pinotta he’d written in 1883, a ‘symphonic vision,’ and his opera Nerone in 1935.

His symphonic vision, called Visione lyrica (Lyric vision), also known as Guardando la Santa Teresa del Bernini (Looking at St. Teresa by Bernini), was written in 1923. The work is a little symphonic poem, just 4 minutes long, but very much in the tradition of Liszt and Richard Strauss’ tone poems.

He was inspired by Bernini’s statue of St Teresa, which is found in the Cornaro Chapel of the Church of Sta. Maria della Vittoria in Rome. 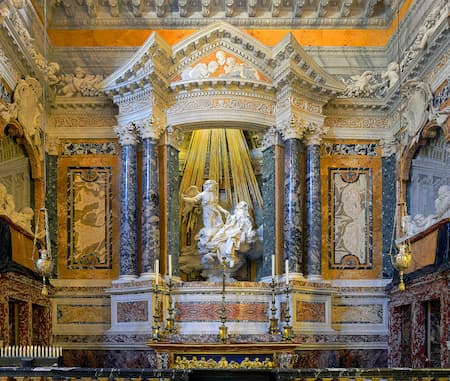 In her writings, St Teresa described the ecstatic state where she experienced the vision of an angel piercing her with a golden arrow. In her autobiography, The Life of Teresa of Jesus, written between 1515 and 1582, she says:

I saw in his hand a long spear of gold, and at the iron’s point there seemed to be a little fire. He appeared to me to be thrusting it at times into my heart, and to pierce my very entrails; when he drew it out, he seemed to draw them out also, and to leave me all on fire with a great love of God. The pain was so great, that it made me moan; and yet so surpassing was the sweetness of this excessive pain, that I could not wish to be rid of it.

The sculpture group captures this moment: she seemed to be folded in on herself, with drapery flowing everywhere, her hand and foot trailing, with her head thrown back in ecstasy. 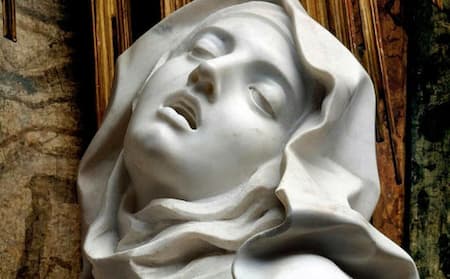 Above her, the angel stands looking down at her, golden arrow in hand, poised to strike her again. Behind, golden glories stream from heaven. 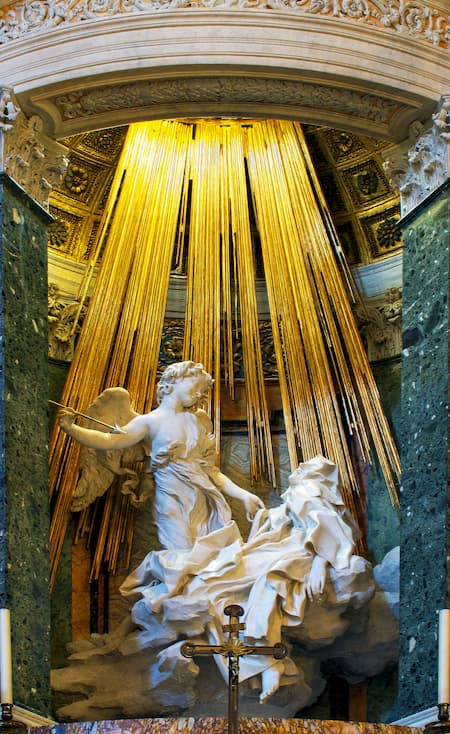 There’s not just spiritual ecstasy captured here – it’s much more sensual in its presentation. Her open mouth and her hooded eyes all convey that her thoughts are not on the mundane.

The music begins with an introduction that expresses a quiet suffering until, with the appearance of the oboe and horns, it almost seems as though we’re entering a work by Wagner. The piece grows to its climax and, with solo violin and repeated chords in the bass, we’ve come full circle back the sound of Mascagni.


For Mascagni, who now lives on almost solely through his perfect verismo work, his 1890 Cavalleria rusticana, a work such as the Visione lirica shows us what else he had in his repertoire. After giving up composing, he continued in his career as a conductor, and in 1940, was in particular demand for performances of Cavalleria rusticana on the 50th anniversary of its premiere.