Composers Inspiration
A Theme of His, Dedicated to Her, Written by a Third
Brahms’ 16 Variations on a Theme by R. Schumann, Op. 9
by Maureen Buja July 14th, 2022
Tags: Brahms 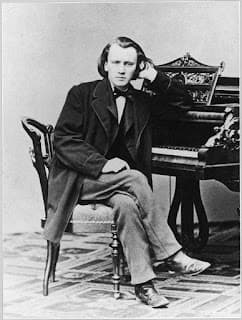 The relationship between Robert Schumann, Clara Schumann, and Johannes Brahms started out as student comes to work with mentor but evolves into something more complex. Brahms had been introduced to the Schumanns in October 1853 with a letter of introduction from the violinist and composer Joseph Joachim. Brahms was then 20 and Schumann praised him in print in the Neue Zeitschrift für Musik as ‘fated to give expression to the times in the highest and most ideal manner.’

One of the first things that the young Brahms did to thank Robert was to write a set of variations on a theme taken from a work written in 1841. The Funf Albumblätter: I. Ziemlich langsam, published part of Schumann’s Bunte Blätter, Op. 99. 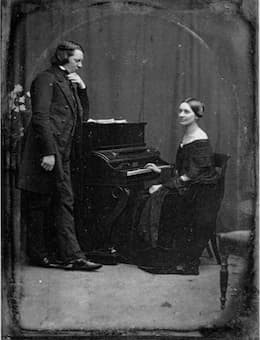 What’s unusual about this theme is that it’s in the minor – most variation sets have major-key themes, which opens the possibility of exploring more keys. If we look behind this, we might find some explanation. 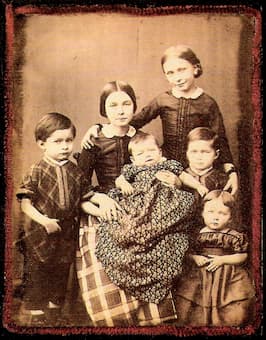 The Schumann children in 1854, before the birth of Felix: From left: Ludwig, Marie, Felix, Elise, Ferdinand and Eugenie.

Brahms handled the family finances and visited Robert in the sanitorium; Clara wasn’t permitted to go in the two years he was there except for just towards the end.

The explanation, now, for the minor-key theme for the variation set that was begun in early summer 1854 may be clearer: Robert was institutionalized and Clara newly delivered, with six other children, the eldest only 12 or 13 years old, at home.

Brahms worked on the pieces in the spring and summer of 1854 and presented a cleaned up copy of the manuscript to Clara on 15 June, four days after Felix was born, and dedicated the work to her. He wasn’t done at that point and added the completed variations 10 and 11 in August. 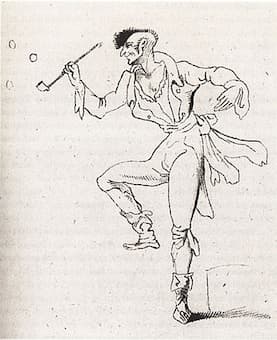 E.T.A. Hoffimann: A Sketch of Kreisler

How he signed the manuscript indicates how he thought of the work in relationship to Schumann’s theme. Variations 4, 7, 8, 14, and 16 each end with a ‘flourish ending in the letter B’; Variations 5, 6, 12, and 13 are signed Kr. The cryptic Kr refer to E.T.A. Hoffman’s antihero, the Kapellmeister Johannes Kreisler. Johann Kreisler was a character in 3 novels by Hoffmann: Kreisleriana (1813), Johannes Kreisler, des Kapellmeisters Musikalische Leiden (1815), and The Life and Opinions of the Tomcat Murr together with a fragmentary Biography of Kapellmeister Johannes Kreisler on Random Sheets of Waste Paper (1822).

Where Schumann, in his writings, summoned for his alter egos Florestan and Eusebius. ‘Florestan the wild’ and ‘Eusebius the mild’ were two aspects of Robert’s own character. In the same way, Brahms used the B and Kr to indicate those works that were Brahmsian and those that were Kreiserlian, i.e., ‘less conventional and further removed from the theme’.

We start in the minor, with the melody moving to the left hand where it becomes a kind of bass-line.


Variation 6 is a break with the earlier rather quiet variations. Now, signed Kr at the end, we have a much fierier variation.


The first 9 variations are all in the minor key and it’s not until Variation 10 that we come into the major key. The Variation serves as a tribute to both Schumanns because not only is Brahms giving us a Variation on Robert’s theme but also makes reference to the theme written by Clara that Robert used in his Op. 5 Impromptus. This is one of Brahms’ most technically complex variations, with canon, canon in inversion, simultaneous canon at the 10th and imitation by inversion.


Variation 11 is an exercise in compression: in Part 1, the two phrases of the theme become 6 bars long, 3 bars each. In Part 2 everything is compressed down to 7 bars and Brahms works with these shorted versions in his variations.


When we get to the final variation, Brahms is in F sharp major (to mirror the F sharp minor of the original theme) but instead of a triumphant finale, everything is understated, if not melancholic, despite the major key.


The almost funereal ending, with the use of the extremely rare ppp (pianississimo) seems a fitting acknowledgement of the troubles of the Schumann family, that would come to one resolution with the death of Robert in July 1856.

As Brahms became closer to the Schumann family and his mentor was institutionalized, Brahms fell in love with Clara. Luckily, Clara had her own career and nothing came of the matter. Brahms never married.