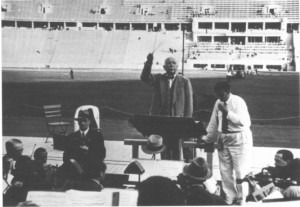 The association of the Berlin Games with the Third Reich severely tainted the Olympische Hymne by Richard Strauss, even though the commission for the hymn did not come from the National Socialists but from the International Olympic Committee.

The German representative of the IOC approached Richard Strauss late in 1932 with a request for an Olympic Hymn. Strauss agreed in early 1933 under the condition that a suitable text could be found. As such, the Committee approached the dramatist and novelist Gerhart Hauptmann, who had received the Nobel Prize in Literature in 1912. Hauptmann agreed, but for one reason or another, the text was never delivered. So the Committee held an open competition with a cash prize awarded for the winning poem. They selected four suitable texts from a pool of over three thousand entries, and sent them to Strauss. Surprisingly, Strauss selected a poem by the unemployed Berlin actor Robert Lubahn, who was unknown as a poet at the time and remains so today.

Strauss seemed not to have been particularly enthusiastic about the Olympic project. He writes to his librettist Stefan Zweig, “I am whiling away the boredom of the advent season by composing an Olympic Hymn for the plebs—I of all people, who hate and despise sports. Well, idleness is the root of all evil.” And Strauss was not known for being idle! Taking a musical theme from a major symphonic project that he never finished, Strauss went to work by setting the poem for four-part mixed chorus and orchestra. Each of the three stanzas of the poem, which deals with amicable relationships among all nations, ends with the word “Olympia” is set to the distinctive symphonic motive. As Strauss indicated in the autograph score, the envisioned performing forces were massive. “4 trumpets, multiplied by four if possible, the rest of the orchestra doubled or quadrupled, according to the strength of the choir and the capacity of the hall.” Strauss completed the project on 22 December 1934, and approximately 400 musicians performed in the premiere.

Musically, the hymn was sought to be rather suitable for an Olympic ceremony. “The folk-like choral melody, incorporation into the melody of some of the fanfare figures that appear in the brass, and the homophonic and unison singing of the chorus that lends simplicity and monumentality to the piece.” The IOC even suggested adopting the Olympische Hymne as the official anthem for all future Olympic Games, but for obvious political reasons this never happened. When the Gestapo intercepted a number of letters between Strauss and Zweig in 1935 that criticized the National Socialists, Strauss was immediately fired from his position as president of the Reich Chamber of Musicians. Despite his dismissal, Strauss still conducted the premiere of his Olympic hymn on 1 August 1936 during the opening ceremonies of the Berlin Games. Party leadership apparently thought it unwise to prevent the famous composer from conducting his own composition.

Richard Strauss aside, the art competition at the 1936 Berlin games featured two categories. “Compositions for Orchestra,” with 20 entries proved to be the most popular musical event. The German composer Werner Egk—whose actual family name was Mayer—was the government favorite. And since the lyrics for his composition Olympische Festmusik were written by Carl Diem, the chief organizer of the Games, it is not really a surprise that he was awarded the gold medal. Lino Liviabella of Italy took silver, and the Czech Jaroslav Křička received bronze. German composers swept the medals in the “Mixed Music, Compositions for Solo or Chorus” category. Surprisingly, the gold medalist Paul Höffer had previously been denounced as a “Cultural Bolshevist.” However, his choral work Olympischer Schwur (Olympic Oath) was based on lyrics by Pierre de Coubertin, the founder of the modern Olympiad, and as such awarded the gold medal. It is not clear whether the jury knew this information at the time. The winning works received a live performance by the Berlin Philharmonics during the Olympics. The concert opened with the Olympic Hymn by Richard Strauss and attracted 20,000 listeners.