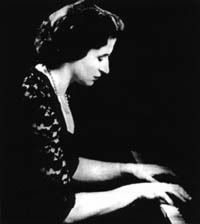 Pierre de Coubertin, father of the modern Olympic games strongly believed that sports and the arts had become artificially separated. As such, he looked to integrate music alongside other art forms in the Olympic competition itself. The first “pentathlon of the muses,” including music, literature, painting, sculpture and architecture was contested during the 1912 Stockholm Olympics. Had Coubertin lived long enough—he died in 1937—he would have been thoroughly delighted by the presence of Micheline Ostermeyer at the 1948 London Games.

A great-niece of the French author Victor Hugo, and a niece of the composer Lucien Laroche, Ostermeyer began learning piano at the age of 4. By age 14, she had left her home in Tunisia and continued her musical studies at the Conservatoire de Paris, only to return to Tunisia after the outbreak of World War II. She performed weekly piano recitals on Radio Tunis and concordantly started participating in sports. Upon her return to Paris she continued her studies at the Conservatoire and took up competitive athletics. Ostermeyer eventually won 13 French national titles in running, throwing and jumping events. She even placed second in the shot put at the European Athletics Championship in 1946, but her finest hours as an athlete dawned at the 1948 London Olympics. A mere 3 months before the Olympic Games Ostermeyer graduated with high honors from the Conservatoire, and prepared for the athletic competition by practicing the piano five hours a day. Once in London, she won gold medals in the shot put and discus throw, and a bronze medal in the high jump! 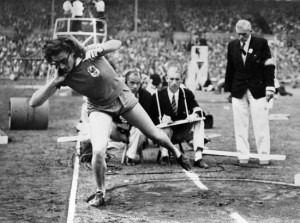 Ostermeyer was the first Frenchwoman to win three medals in a single Olympic competition. To celebrate her winning ways, she gave an impromptu Beethoven recital at the French team headquarters and subsequently played a concert at Royal Albert Hall! “Sport,” she said, “taught me to relax; the piano gave me strong biceps and a sense of motion and rhythm.” The Parisian musical establishment was initially not enthusiastic about accepting a muscular young woman who appeared all over the sports pages. But Ostermeyer rose to that challenge as well, and in a single evening played the Brahms D minor concerto, César Franck’s Symphonic Variations and Liszt’s E flat concerto! It was a test of her strength, stamina and artistic integrity, and the evening and her subsequent musical career was a roaring success!