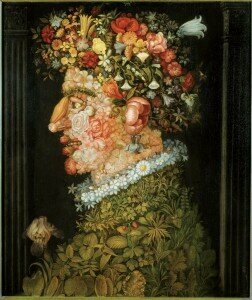 In Asia, Chinese New Year, also known as the Spring Festival, fills the air with song, including Happiness Fills the Air, a sound that for many people is the audible sound of Spring.

Traditional: Happiness Fills the Air (Shanghai Philharmonic Orchestra; Wu Guo-wen, cond.)
We start, as we must, with Vivaldi and his Four Seasons. This set of violin concertos has become indicative of Vivaldi’s output but at the same time has become so familiar as to be nearly unlistenable. Nonetheless, in Alice Harnoncourt’s hands, the violin part become a new sprout of Spring.

Piazzolla: Las 4 Estaciones porteñas (The Four Seasons): I. Primavera Porteña (Alfredo Marcucci, bandoneon; Piotr Stefaniak, double bass; Philharmonic Cellists)
For Portuguese composer Eurico Carrapatoso, his Spring is a dancing time for carnations. This 2014 work was a commission by the pianist Filipe Pinto-Ribeiro for work that would match Piazzolla’s work.

Carrapatoso, Eurico: Quatro Últimas Estações de Lisboa: II. Primavera (Filipe Pinto-Ribeiro,piano)
Going back in time to the 17th century, the violist Christopher Simpson wrote a challenging set of fanstasias called The Months and a set of fantasia-suites on The Seasons. These seasonal suites are based on a favourite English device called the ‘Division,’ where short repeated motifs in the bass are divided (the division) into smaller notes. Whereas in general, these were improvised, but for Simpson’s Season suites, they were written out, yet should always sound improvised.

Desyatnikov: Russian Seasons: Spring: III. Jagoryevskaya (Song for St. George’s Day) (Julia Korpatchova, soprano; Gidon Kremer, violin; Kremerata Baltica ; Gidon Kremer, cond.)
So let’s close with The Rite of Spring. Stravinsky’s 1913 ballet was a shocker when it opened and still retains the ability to strike us from that opening ethereal bassoon line to the last note when the sacrificial victim falls. Spring may be flowers and light, but what was the cost of that appearance.