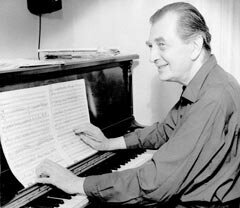 Alexander Tcherepnin at the piano

Commissioned by the Associated Music Publishers in New York, Alexander Tcherepnin premiered his second symphony in Chicago on 20 March 1952. It took Tcherepnin a long while to finish the composition, as he labored on the orchestration for the better part of 4 years. Not overtly programmatic, the composer described the work as “dynamic and emotional,” and he admitted that it “somehow reflects the agony of the war years, the rising hopes of a better world, the desolation which I felt at the death of my beloved father, the mystery of death itself, the controversial feeling of a post-war period.” Tcherepnin and his family were caught in Nazi-occupied Paris during World War II, having unsuccessfully attempted to escape. He supported his family by giving composition lessons, and by writing what he called “utility music.”

Alexander Tcherepnin: Symphony No. 2, Op. 77
“To live through the Occupation was not easy,” he remembers, “and I had to compose lots of trash for dancers, for music halls, and so on, which had to be signed by another name because I was Russian.” But once the Occupation was over, “my fertility returned.” And it was within this period of renewed creativity that Tcherepnin set to work on his Second Symphony. However, since he started to resume his traveling and concertizing, the completion of the work took somewhat longer than expected. He toured America in 1948, and together with his wife, accepted a teaching position at DePaul University in Chicago. He later wrote that coming to the United States in 1949 was “the great change in my life.” This change of residency coincided with the breaking free of an abstract musical language, from “liberating my thoughts and my language from localized geographical and stylistic formulas.” Scored for triple woodwind, full brass, a large percussion section, celesta, harp, piano and strings, the work certainly made an impression with critics and audiences alike.