Composers Inspiration
Cows – 8 Different Ones
by Maureen Buja May 21st, 2017 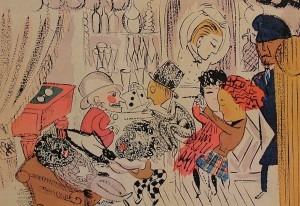 When Darius Milhaud immortalized his favorite Brazilian tavern in a brilliant ballet work, Le Boeuf sur le toit, he was joining in a long line of composers who brought the common cow into music.

To take a look at the cow in music over a range of years, we can start with a song from the 13th century Codex Buranus – these are more familiarly known as the Carmina Burana – the songs from Beuern. One of the songs of unhappy love is about the farmer’s maid driving her cows to pasture where she meets a scholar…

Grieg: 19 Norwegian Folksongs,Op. 66: No. 8. Cow-Call (Geir Botnen, piano)
The Irish pianist and composer Joan Trimble (1915-2000) started her career as a duo pianist with her sister Valerie and composed music for them to play. Her pleasant piece, The Cows are a-milking, takes full advantage of the duo piano format.

Trimble: The Cows are a-milking (Roy Holmes, piano; Una Hunt, piano)
Inspired by a beloved cookbook by Emile Dumont, Leonard Bernstein sets four of his recipes in a work for voice and piano entitled La bonne cuisine. From the Beef section of Dumont’s La Bonne Cuisine – Manuel économique et pratique (ville et campagne), we have a brief description on the value of cooking with Ox Tails. It joins recipes for Plum Pudding, a Turkish chicken recipe, and one for a very quick rabbit stew.

Milhaud: Le Boeuf sur le toit, Op. 58 (London Symphony Orchestra; Antal Doráti, cond.)
In his 1920 setting of The Pretty Maid Milkin’ Her Cow, Australian composer Percy Grainger took as his basis a folksong from Lincolnshire in England that he had collected in 1906. Early one morning, the poet hears a damsel singing as she milked her cow – her voice was so beautiful that the listener was halted in his tracks and filled with sorrow.

Grainger: The Pretty Maid Milkin’ Her Cow (Peter Pears, tenor; English Chamber Orchestra; Benjamin Britten, cond.)
As a contrast with a real cow, the Russian composer Tcherepnin sets his piece to be about a porcelain cow – set in a vitrine next to two greyhounds. The placidity of the cow as contrasted with the active dogs was the composer’s inspiration.

Tcherepnin: Le Monde en Vitrine, Op. 75: I. The Greyhounds and the Cow (Giorgio Koukl, piano)
And finally, we have a real farmer describing his cows, but taken through the medium of modern electronics, we also have a rhythmic piece full of verbal stutters.