In Tune Arts
Music in View – The Art Institute of Chicago
by Maureen Buja September 7th, 2021

The Art Institute of Chicago is one of the rare art museums that was founded by artists, rather than by collectors. With the Chicago Academy of Design in 1866, a group of 35 artists started a free art school with its own art gallery. The Great Chicago Fire and several bankruptcies later, the Chicago Academy of Art became the Art Institute of Chicago. Their first building lot was purchased in 1882, but it was the World’s Columbian Exposition of 1892-93 that brought them the building where they are now located.

When we looked for musical images in the collection, we had more than 5,000 years of human handiwork to choose from. We’ll start in China.

Porcelain from China changed the world of dining. It was thin, fine, could take a design, and was pure white. Until the manufactures in Europe could figure out how to make porcelain, China was the only source. China, on the other hand, had to figure out how to appeal to the Western market and one way was through putting western-style imagery onto their wares.

In the French print, a woman is seated at a low table, playing a tympanon (a kind of hammered dulcimer), joined by a man playing a lute and one playing a transverse flute (aka the German flute). On the plate, the whole angle of the image is changed, the front of the woman dress is dropped a considerable distance with much more visible cleavage. The flutist looks more like he’s playing than in the original print – his right-hand fingers are raised, and the flute is in a better position for playing. The men are depicted as shorter, with wigs that fit them more closely, and they’ve been moved off their terrace into an outdoor arbour. Their eyes have been given Chinese characteristics. Around the edge of the plate, are typical Chinese landscape scenes. This is one of the indicative points showing this crossing of western and Chinese aesthetics. Much of Chinese painting is landscape painting. Pictures of individuals or even groups, like these musicians, were rare. 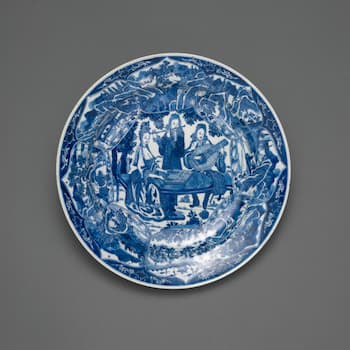 
Often art is made on an object at hand, rather than on a pre-prepared canvas. Such is the case with this little painting by Henri de Toulouse-Lautrec. Painted on the skin of this tambourine is a circus scene. A bareback rider circles the ring on her horse; to her left is the ringmaster and to her right, is the audience, represented as red lines on a blue background. Circuses were favourite subject of Toulouse-Lautrec and a similar subject can be seen in his 1887-88 painting of another horseback rider in the painting Equestrienne (At the Cirque Fernando). The rider wears the same green dress, and the audience stalls are lined in red, etc. It is suggested that this tambourine might have been painted for the Café de Tambourin in Paris, which was an artists’ hangout in Montmartre. The decoration of the café included tambourine tables and chairs. In July 1887, Van Gogh and his friends Paul Gauguin, Louis Anquetin and Émile Bernard held an exhibition at the café and Toulouse-Lautrec did a pastel of Van Gogh at the café that year as well. 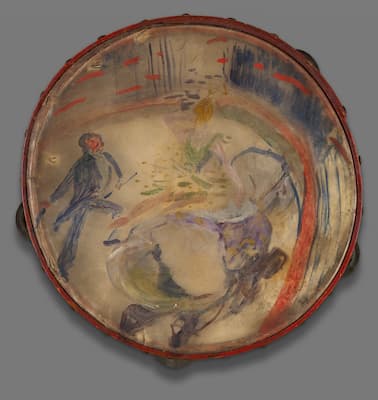 
In Jackob Ochtervelt’s The Music Lesson of 1671, we have a situation we’ve seen many different Dutch paintings, but here, it’s slightly changed. The woman isn’t shown sitting at the keyboard awaiting instruction from the man standing behind her but has taken the position of being the instructor to the seated man, who looks to her for reassurance that he’s doing the right thing. She’s the authority here, pointing at the score with her bow, and he’s the one who’s trying to find his way through music. The violin was, at this time, regarded as a man’s instrument, and her possession of it emphasizes where the power lies in this relationship. Also lying on the table (or is that a closed keyboard instrument) is a basso viola da gamba, also an instrument that men are more often shown. 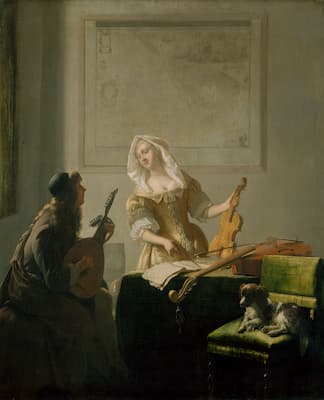 We can compare this with Gerard Terborch’s painting from the same time of another music lesson. Here, the teacher, standing with his baton in hand, is instructing the anxious student, playing the same instrument we saw in the Ochtervelt work. The viola da gamba again lies on the table. But, what might be regarded as a deeper story in this work is that they’re not working, as in so many Vermeer musical paintings or in the Ochtervelt, in front of a well-lit public window, but are now in a bedroom, with the bed looming in the shadows behind. 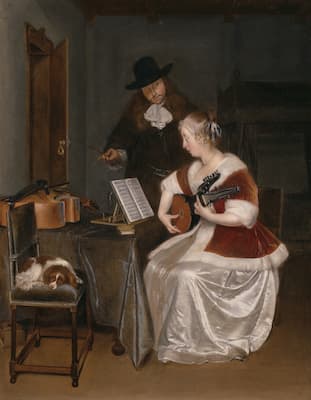 
How can you wear music? If you’re a stylish person at the turn of the 19th century, perhaps this pair of leather gloves might be to your taste. The images which are derivative from those created by the French artist Jacques Callot earlier in the 17th century, include musicians such as a drummer, a woodwind player in a big hat, a violinist standing with his legs together, and a man with a feather in his cap playing the guitar. The images, such as that of the violinist and the guitarist, are reversed. These images were placed on the leather with copper plate printing before the material was cut for making gloves. 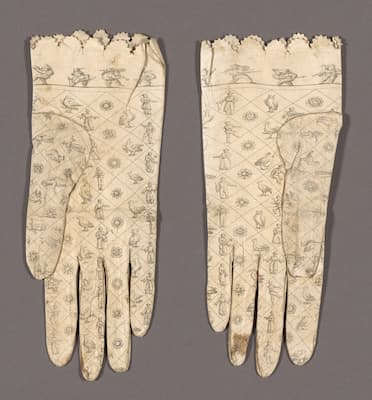 
The caricaturist James Gillray poked fun at British politics and society with his etched satires, mostly published between 1792 and 1810. In this print from 1800, the art of music is held up to his raking light: what could be a pleasant trio with a violinist, a cellist and a pianist, has turned into something very different. In the center, a woman with an exultant grin on her face is at the piano, to her left is an aging cellist who is still playing and to her right is an aging violinist who has given up and is holding a spotted handkerchief. Both men are quite angry and are showing their displeasure to the world; she however, is so delighted that she hasn’t noticed their reaction. Even her toes are turned up in pleasure. 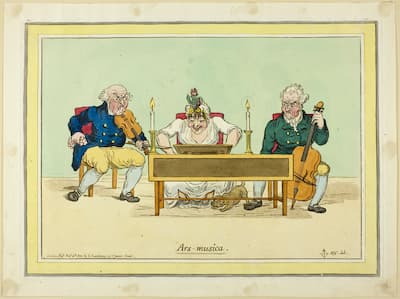 This image is not of any known people but is actually a derivation of another work by James Gillray, called Playing in Parts. 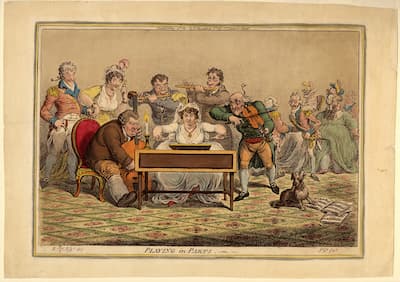 This Gillray image took as its source a watercolour image by the amateur artist Brownlow North. In the North image, the ensemble of 2 flutes, violin, cello and piano are scraping along, providing music for the dancers behind them. None of the musicians looks very happy and the little dog at the bottom right is howling in disapproval as it sits on the music scattered on the floor.

By just concentrating on the 3 central figures and changing their expressions, Gillray has given us a very different kind of musical party. Now the little dog, under the piano, looks like he’s growling, not howling.


In a picture of the ‘Holy Kinship,’ German artist Albrecht Dürer adds two riotous musical angels to lighten the subject. The ‘Holy Kinship’ refers to images that show Jesus’ extended family, starting with his maternal grandmother Saint Anne, who married three husbands and had three daughters named Mary. The first Mary had Jesus, the second Mary had James the Lesser, Simon, and Jude, and the third Mary bore James the Greater and John the Evangelist. Six of the 12 Apostles, when you include John the Baptist, were cousins of Jesus.

In the Dürer image, a small angel with a set of bagpipes and another with a lute cavort at the feet of Mary and Saint Anne. This could be representing rural (bagpipes) and urban (lute) culture, or the fact that Christianity appeals to both societies, or the fact that the bagpipes have been set aside while the lute sounds may show something completely different. 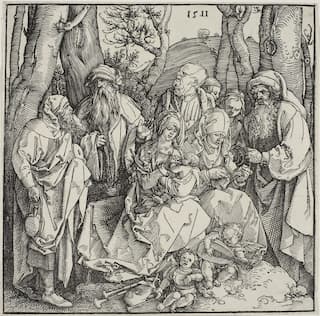 
One of the most unusual collections at the Art Institute are the Thorne Rooms. The wealthy Narcissa Niblack Thorne, married to the heir of Montgomery Ward, devoted her time and attention to the creation of miniature rooms, done on the scale of 1:12, i.e., 1 foot = 1 inch (30.48 cm = 2.54 cm). The creation of the rooms, done in the 1930s, benefitted from the large number of unemployed crafts-workers she could call on. Both English and American rooms were created, numbering approximately 100, and 68 of them are in Chicago at the Art Institute. The miniature rooms are made of the same materials as a full-sized room, and some include original works of art.

Narcissa Niblack’s inspiration came from the miniature furniture sent to her by her uncle in the Navy as he travelled. She started her collection around 1900, when she was 18 and her marriage at age 19 to James Ward Thorne, heir to the Montgomery Ward department store fortune, gave the backing to do the research, create the sketches and blueprints, and hire the staff to make her ‘period rooms’ come to life.

We peeked into the rooms to find out how she incorporated musical instruments into her settings. In her Virginia Parlor of 1758-87, we have a square piano on the right side of the room, with a music stand at its right. This could be hold for the music of a flutist, a violinist, or a singer for a small intimate at-home performance. 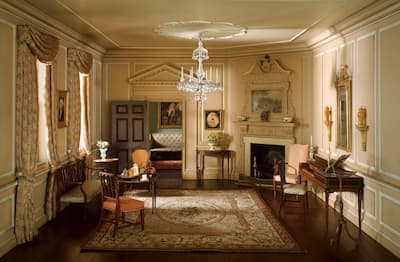 
In an English drawing room from ca. 1800, we have small spinet angled into the wall, another music stand, with a candle to help the performer see the music, and open on the window seat, a violin case and instrument, with the bow tucked into the case’s cover. As with many of the Thorne rooms, it seems as though the room was just emptied before we arrived. The spinet was a small harpsichord, with the keyboard set at oblique angle to the strings. 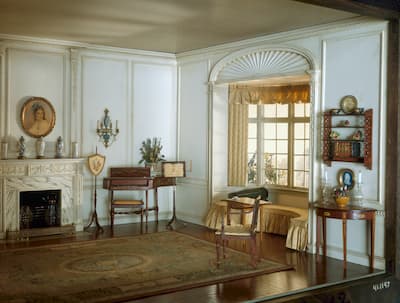 
In the German sitting room of the Biedermeier period, we have, as expected, the piano in the sitting room, but this is a giraffe piano, where the strings are set perpendicular to the keyboard, with the curve up the case from the short high strings to the longer bass strings, the name ‘giraffe’ seems perfect. The room is full of hand-work activities, starting with the needlework rug on the floor, and then there’s the embroidery table in the window, the work box next to the chair on the left, the piano, and, if all of that is too much, there’s a graceful couch for lying on to read novels. 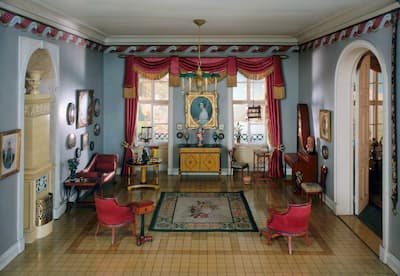 
In the California living room of the second half of the 19th century, we have a room filled not with the lightness of western design, but with the heavy Georgia styles that showed the prosperity of its owner. The square piano on the left side isn’t the delicate 18th century style that perched on fine cabinet legs, but the heavier 19th century style of heavy legs. This piano wouldn’t walk across the room, it would stomp. Even the piano stool looks too heavy to move easily. The two other tables in the room match the sturdiness of the piano.


In these selections from the Art Institute of Chicago we’ve seen music as representing Western society in the Chinese plate, as an indicator of men’s and women’s personal power in the various Music Lessons, and, in the Thorne Rooms, as an integral part of everyday life. Music can make people furious in the Gillray satires and can provide a lullaby for the baby Jesus. Wearing music on your hands should become more common!