Silence and sound – we see this in the paintings of Vermeer and hear it in the Vermeer composition by Gary Carpenter. He was intrigued by an entry listing Vermeer’s works where in 1711, an inventory of the property of the widow of Nicholas Van Assendelft mentions ‘‘A damsel playing on the clavichord by Vermeer.’ It is not known if the painting still exists or if it refers to either of the two Vermeers held in the National Gallery in London: A Young Woman Seated at a Virginal or A Young Woman Standing at a Virginal or to another painting now lost. 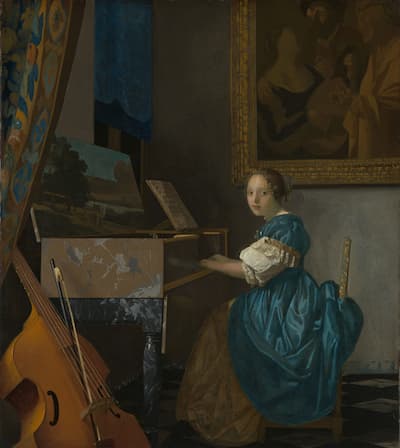 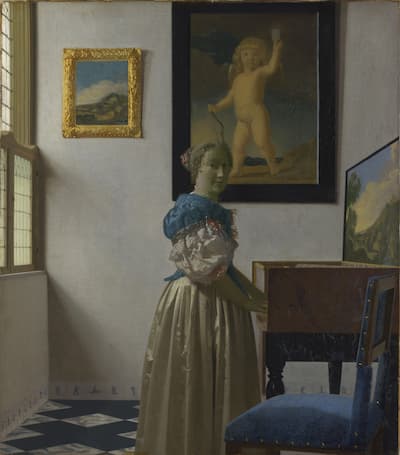 For Carpenter, this was an interesting value of sound (is the painting still extant?) or silence (is the painting lost?) in art. He also was interested in the sound of a clavichord, an instrument that pre-dated the harpsichord. A plucked-string keyboard, the clavichord does not have the ability to sustain a sound – the metal string is plucked with a small metal blade, the pitch sounds and quickly fades away. The virginal, mentioned in the title of the two Vermeer prints, is a kind of small harpsichord with only one string per note (harpsichords may have multiple strings, and multiple keyboards). Harpsichords were louder (because of the use of multiple strings) and not as metallic sounding (often the plucking mechanism was a goose quill).

The instrument pictured in Vermeer’s work is actually a type of harpsichord made only in northern Europe, called a muselaar. The keyboard is to the right side of the square case, versus the harpsichord that had the keyboard on the wide end of an angled case. When the case was closed, the musical instrument became an unobtrusive (if tall) piece of furniture. Virginals have keyboards on the same side as the muselaar, but the keyboards tended to run the entire long side of the instrument, rather than being placed to the right as in Vermeer’s paintings. 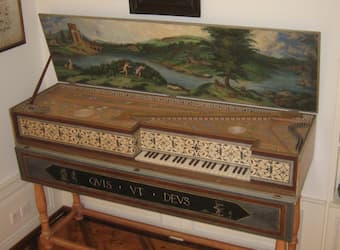 Who are these women? Commentators look to the details to tell us something about what Vermeer wanted to convey to the viewer. The Young Woman Standing has an empty chair in front of her, suggesting that someone is expected, the image behind her is of Cupid, the god of love, and her direct gaze holds our eye with a very straightforward look. The Young Woman Seated, on the other hand, is a little less straightforward in her gaze, and the picture behind her is of a prostitute and her client. The two women have similar hairstyles, and similarly coloured clothes. The standing woman has more jewellery and is older. The two instruments are decorated similarly on the outside and both are on a dark stand, but the interior images differ, although both are landscapes. Both women await someone else, but the implication is that the seated woman may be in it for the business. The images around the standing woman imply faithfulness in love.

Gary Carpenter took the sound of the clavichord as the basis for his work – he used its ‘small and evanescent sound’ to create a sound world that might occupy either of the paintings. Sound is matched with silences, particularly in the third movement.


Van Assendelft’s Vermeer was awarded first prize in the British Clavichord Society Awards for Clavichord Composition in 2004 and was shortlisted for a British Composer Award in 2005. It was given its premiere on 29 August 2004 by its dedicatee, Pamela Nash, at St Cecilia’s Hall, Edinburgh, who plays the work on this performance.