The Cleveland Museum of Art was founded in 1913 by 3 Cleveland industrialists and has grown to be the 4th wealthiest in the US. It holds international collections ranging from Chinese, Japanese and Korean Art to Western Medieval through Modern. 20th century has been a particular strength of the collection.

Picasso’s use of the commedia del’arte character of Harlequin took a figure that was popular at the turn of the century and used it in a variety of works. Here, we see a cubist Harlequin holding a violin and a sheet of music with the title ‘Si tu veux.’ There’s a G-clef on the page and lines for music, but no actual written music on the page. The song probably refers to Albert Valsien’s song ‘Si tu veux Marguerite’ which later was used in the 1937 film about soldiers in WWI, La grande illusion.

Picasso’s Harlequin wears his traditional diamond-patterned costume and triangular hat. Where the shadow of the violin falls on the costume, the colours of the diamonds change from blue and grey to red and black. The cubist violin retains its scroll, an f-hole, and the change in width between the body and the fingerboard but has been broken up into 3 distinctive parts.

The popular song’s lyrics of ‘If you wish, Marguerite, make me happy by giving me your heart’ is thought to be a reference to Picasso’s marriage to Russian ballerina Olga Koklova in 1918, the same year as this painting. 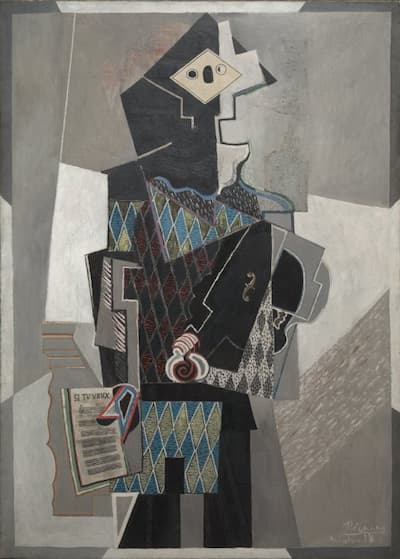 
In our survey of music in art across the museums, we haven’t had any art by composers. In this 1989 etching, American composer John Cage goes back to his earlier interest in visual arts. He had promised his teacher, Arnold Schoenberg, that he would leave visual arts behind and devote himself to music, but at the end of his life, he turned back to the visual arts and created works that were intended to ‘sober and quiet the mind.’

In this work, 10 Stones, the stones come from tracings Cage made of rocks he found in the New River near Mountain Lake, Virginia. They are in browns, blues, gold, and green, and sit on a puff of colour. This was created by smoke, made when the printers of the work extinguished burning newspapers with the press. 10 versions of this work were made, each with a distinctive stone and smoke pattern.

The creation of the work is associated with his music in that he conducted chance operations to select and position small stones on the printing plate, determine their vertical or horizontal orientation, and to choose their colour. 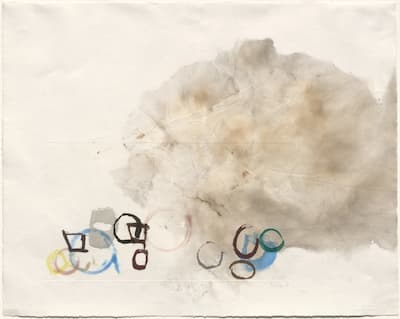 John Cage: All Sides of the Small Stone for Erik Satie and (secretly given to Jim Tenney) as a Koan (Aki Takahashi, piano)


Everything in the image speaks of wealth: the marbled floor, the elaborate mantelpiece at the left and the ornate chest on the right, topped with Chinese vases and Japanese lacquerware. The family are dressed in the finest of silk clothes, their fashionable King Charles spaniel is entering the room, the table is overlaid with a Transylvanian prayer rug, and all have been trained in music. Part books are scattered on the table and the woman holds another part book on her lap, following the notes with one hand and keeping time with the other. To the side sits a viola da gamba, and behind it, a boy plays a white recorder, possibly made of ivory, a girl plays a mandolin, and an older man plays a violin, bow on the strings. In the room at the back are two more children, also elaborately dressed, and their nursemaid.

Music is yet one more signifier of wealth and position, as well as the leisure time available to learn an instrument. The harmony of the family, an important social point, was also signalled by the close ensemble. 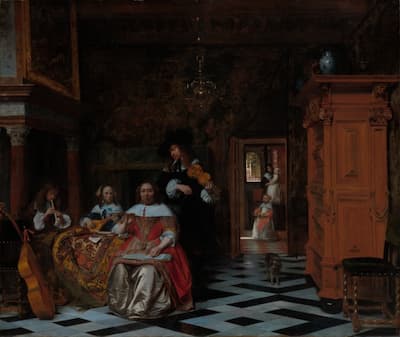 
The 19th century saw a number of self-taught artists in America. Henry Church (1836-1908) lived in Chagrin Falls, Ohio, and had a passion for different fine arts. In this self-portrait, created around 1880, Church depicts himself and a set of 5 winged muses. We can see painting, sculpture, and 2 for music as well as a muse for blacksmithing, which was his own profession. In front of him are a still life of fish knife, a pear, three peaches, and a bouquet of roses. Church was the founder of the first commercial art gallery in northeast Ohio, Church’s Art Museum, which only held pictures that he had painted. 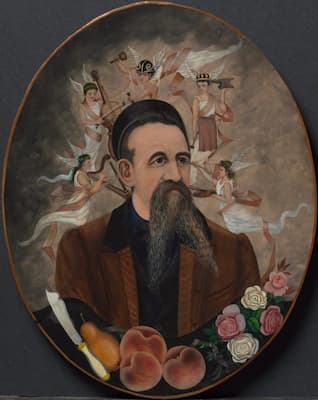 
In the mythology of Japan, music often plays an important role. In this print from the Edo period, one of a set of 5, we have the legend of the Shinto goddess of the sun, Amaterasu. She was offended by her brother and shut herself into the Rock-Cave of Heaven, making heaven and earth suffer total darkness. The other gods immediately set out to entice her out of the cave by making her think that they were having a festivity. When she called out for the reason for their merriment, they said it was because a new god greater than her had come. She saw herself in the mirror and, not recognizing herself, came out of the cave to see who this new goddess was. The other gods prevented her from returning to the cave and light was returned to the world. One of the pieces of merrymaking equipment was a large Japanese taiko drum, played with two large wooden sticks. 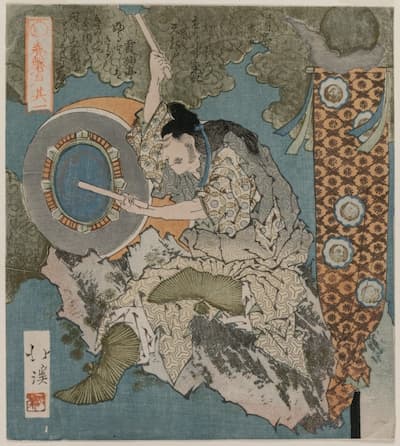 
In this 19th-century forest, the late afternoon sun brings light to the hillside, the trees, and the water. There are flowers in the reeds and on the water. In the centre, a satyr sits with a water vase, playing on his pan pipes. In his writing about the natural world, the artist, Célestin François Nanteuil (1813-1873), compared the leaves of plants to lace, wrote about the reflections of flowers in water, and how they seemed to embroider the ground they grew on. All of this is visible in this large landscape. 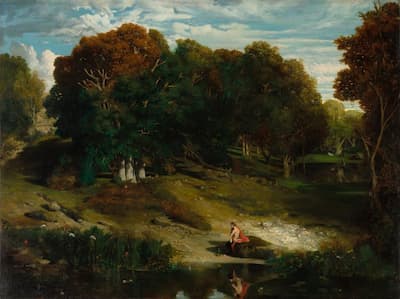 
We are again in a Dutch interior with light coming in through immense windows on the left. The back wall is filled with pictures of women, signalling that this is not a regular house but a brothel. These images of women rarely appear in the paintings of this time. We also get a clue to the relationship between the men and women by looking at their instruments. She’s not playing a domestic harpsichord, but a violin, which was more often seen in men’s hands. He’s playing a recorder, which was most often depicted in the paintings made of drinking establishments, not in the private home. We also don’t see the scattered part books that figure so prominently in household paintings. She’s holding the violin in a manner more common with those unschooled in proper technique, holding it pressed to the chest rather than up under her chin. The people are dressed sumptuously, but we’re missing the elements that would show this to be a household of culture in the same way we’ve seen in other paintings from this period. 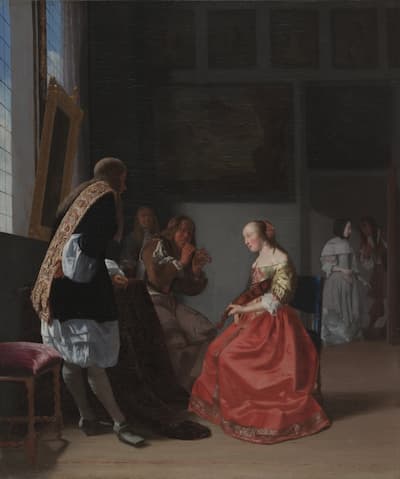