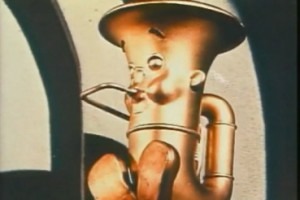 Another piece for children that, like Britten’s Young Person’s Guide to the Orchestra, served as an introduction to the instruments of the orchestra was George Kleinsinger’s memorable Tubby the Tuba. Tubby gets tired of always only being the support for the orchestra and never having the melody. One night, a bullfrog teaches him that bass voices can also carry melodies and the whole orchestra is changed.

Aaron Copland (1900-1990) had his first foray into opera with a small one-act piece he did in 1937. The Second Hurricane was written to be performed by students with a few adult speaking roles. A group of high students is working to rescue the victims of a hurricane and get caught themselves on the island when the second hurricane sweeps through. The work begins with a choral overture that introduces the major forces: the parents and the children. One of the great parent lines: ‘you do your school work and be a hero that way.’ You can just imagine the children’s chorus rolling their eyes!

Copland: The Second Hurricane: Choral Overture and Introduction to the Principal Characters (Leonard Bernstein, narrator; High School of Music and Art Chorus; New York Philharmonic Orchestra; Leonard Bernstein, Conductor)
An updated version was created in 2000, for the 100 anniversary of Copland’s birth, moving the action to a television studio where the six characters describe their actions for a television show called Teen Heroes. It’s rare that a modern composer can write such accessible music for students as an opera and it’s a pity that this doesn’t get staged more often.

Paul White (1895-1973) captured one of the inevitable parts of summer with his “Mosquito Dance.” Everyone can guess what that slap at the end is about! 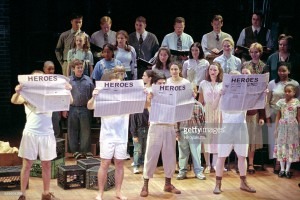 The first opera composed for television has also become an important opera for children. Gian Carlo Menotti (1911-2007) was commissioned by the American NBC television network to create the first opera for television. The premiere was on 24 December 1951. The composer said that he deliberately tried to recapture his own childhood in Italy where Christmas gifts were brought by the Three Kings. The part of Amahl, as specified by the composer, must always be played by a child and not by an adult singer imitating a child.

Menotti: Amahl and the Night Visitors: Oh, Mother, you should go out and see! (Ike Hawkersmith, Amahl; Kirsten Gunlogson, Mother; Nashville Symphony Orchestra; Alastair Willis, Conductor)
Amahl, a crippled shepherd boy, sees the star rise over Bethlehem, but she doesn’t believe him. After they have gone to bed, the Three Kings arrive, looking for a place to rest. The Kings tell Amahl of their journey and the gifts they are bringing to a wonderous Child. Amahl wants to send his own gift but all he has is his crutch. When he gives it to the Kings, he is healed and, with his mother’s permission, goes with the Kings to see the Child. 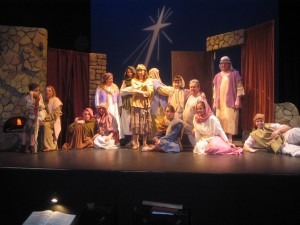 Children are a difficult audience. They are aware when then are being talked down to, but on the other hand, they have a real joy in some of the fundamental ideas in music such as rhythm or melody that can make them a wonderful audience. In his Young People’s Concerts, which began in 1958, Leonard Bernstein brought music to a young audience, explaining things such as humor in music, “what is a melody,” jazz, various musical forms, all of which were done with the New York Philharmonic as the music source.