In Tune Arts
Music and the Arts in the Middle Ages
by Ursula Rehn Wolfman April 15th, 2011

Over the course of centuries, the relationship between music, the arts and literature has always focused on their similarities and differences. 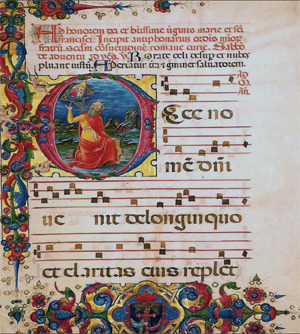 The difference between painting, which one sees and music, which one hears, has always been considered obvious. However, as Philippe Sollers (Tel Quel, No. 20, 1965) says about painting: “Il faudra admettre un jour ce phénomène évident: la peinture n’est ni plus ni moins que de la penseé qu’on peut voir… La peinture pour être vue, doit commencer par être pensée” (“One will have to admit one day this obvious phenomenon: painting is no more nor less thought that one can see… painting in order to be seen, has to start in being thought”). We need to rethink the process by which we look at art and apply the same process to music, which, rendered as a thought process – notes on a page – comes to life entirely in its performance. The performance of ‘thinking’ the painting can be related to the performance of musical compositions.

Many writers, Baudelaire among them, considered music as the highest of the arts in relation to painting and literature, since it remains in the realm of imagination and is not tied to a specific represented reality (the only exception is programmatic music, of course). Rather than establishing the relationship between the ‘arts’ as a mere comparison of their similarities and differences, we will focus and elucidate their mechanisms, starting here with the Middle Ages and moving, in future articles, to the Renaissance, Baroque, Neo-Classical, Romantic and Modern periods.

During the early Middle Ages, music was monophonic, single line plainchant, transmitted orally, its composers and musical notation unknown. This music emanated from the monasteries, convents and churches in Europe, celebrating the ‘Divine Office’ eight times during the day, becoming also known as Gregorian chants in the 7th century (named after Pope Gregory the Great). 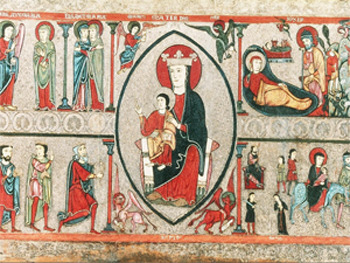 In the 9th century, the first musical notation appeared, in the form of four lines using square notes on vellum – the square form resulting from the use of the quill. The speed of the music was initially set through the use of a staff – hence the English term “staff writing”, which indicated the precise speed with which the music was to be performed. Time and space however were not codified. The Latin word ‘hora’ (hour) was in fact synonymous with prayer. Each of these hours was divided into ‘four’ parts of ten minute duration, while each minute was divided into ‘forty’ moments. Only by 1400 was the day measured in 24 hours, each hour into 60 minutes, each minute into 60 seconds. The concepts of space and time changed only with the Renaissance.

Some of the most famous composers of the late Middle Ages were Alphonse the Wise of Spain and Hildegard von Bingen in Germany. Another musical tradition during the Middle Ages were the songs of the troubadours, known as trouvères in France and Minnesänger in Germany. These were wandering minstrels singing ‘Minne’ songs, love songs to a lady, who usually remained unobtainable. This tradition came to Europe in the form of ‘romances’, i.e. songs in the Arabic/Spanish tradition of 8th century Spain. 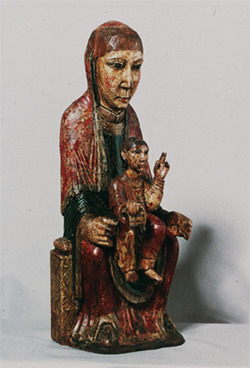 As to the relationship between music and painting, painting was at that time also two-dimensional, single line, without any pictorial depth. The represented figures were flat, stylized, without volume or expression, the painters unknown. Paintings would often contain successive time sequences, different historical events, all represented in a flat, two-dimensional space. Medieval sculptures also do not follow ‘correct’ proportions. The dimensions here seem distorted, the upper body too long in comparison to the knees and legs. The binary concepts expressed in Medieval music and painting find their equivalent in Medieval literature, in the morality tales, where the protagonists are either simply good or simply evil with no psychological depth and no evolutionary change during the course of the tale. Only during the Renaissance period in the 14th, 15th and 16th centuries did a profound change occur in music, the arts and literature.